I'm either a sucker for anything trendy related to gardening, or I continue my quest to grow vegetables tomatoes at our home. I would hope that the latter is closer to the truth, but we've experimented with topsy-turvy upside-down planters, square-foot gardening, container-only gardening, and plant-in-the-dang-dirt-and-hope-something grows gardening. (Note: Topsy-turvys worked very well when we lived in an apartment and had a balcony that got lots of light. Everything else has been meh.)

So this year, it's straw bales! 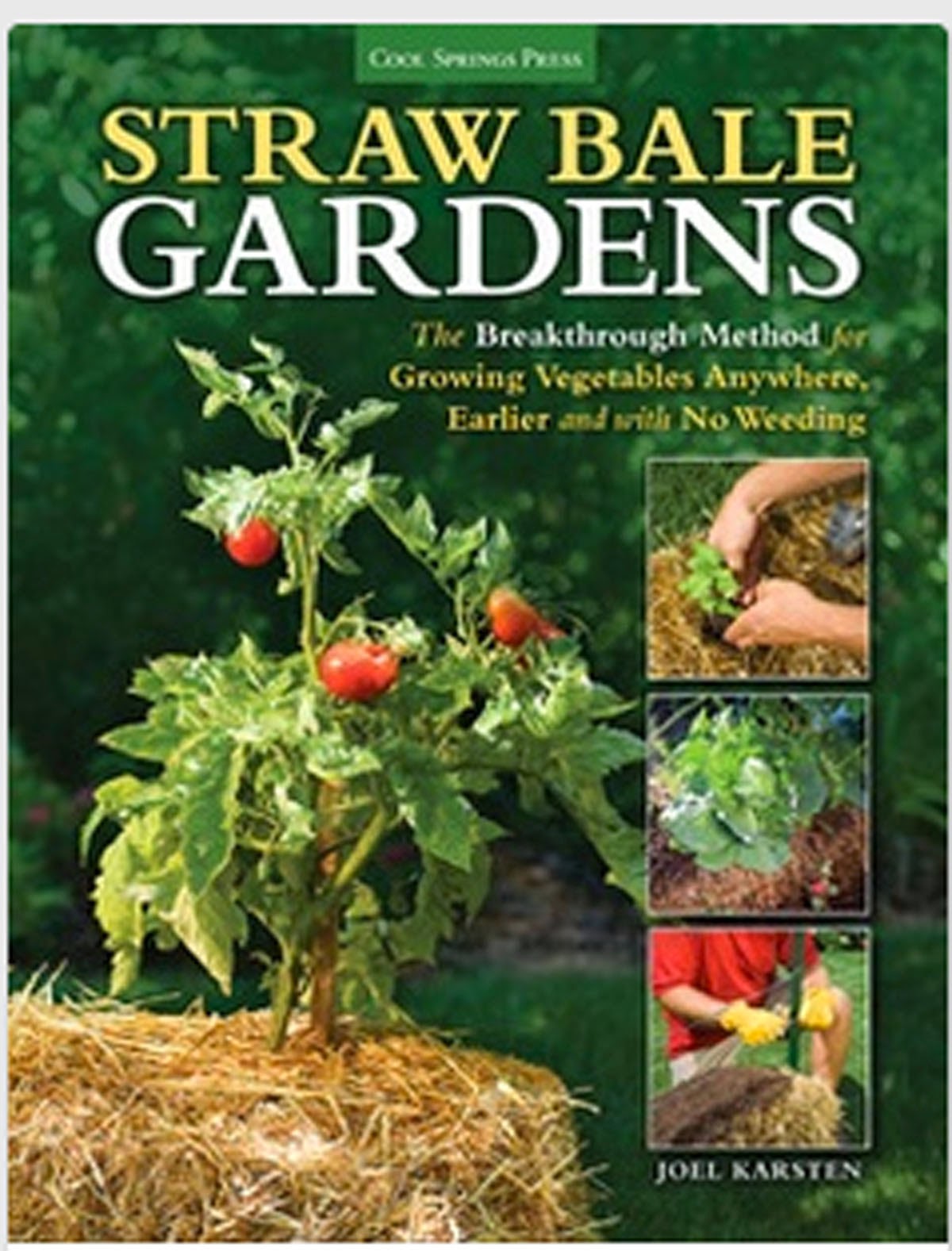 As Joel Karsten, the main evangelist for straw bale gardening puts it, vegetables and flowers need good soil, and weekend gardeners want to minimize the amount of time and maintenance needed to keep a garden healthy.

This method of gardening works very well from areas inside the Arctic Circle, to the heat of the Caribbean.  If you can find bales of straw, or similar bales of tightly compressed organic material, you can garden this way. Simply replacing existing soil with a "container" filled with beautiful "conditioned" compost as your growing media.  From airid desert regions to the rainiest places in the world, if you have access to sunlight and water then this method of growing will work.  No special tools are required, and no knowledge of gardening is really required to be successful.  The elimination of many of the most common problems associated with vegetable gardening, makes this method great for beginning gardeners, organic growers, or those experienced gardeners that are just tired of all the hard work.


Here's our deal. We have lots of moles and voles that eat stuff below ground level. We have deer and squirrels and birds that eat stuff above ground level. We have few spots in the yard that get full sun for more than a few hours a day. We could invest several hundred dollars and build raised beds or buy containers. Instead, I invested less than $100 in 10 straw bales and the equipment to set them up. (Oh, and another $100 or so in watering devices and varmint-repelling stuff that I would have purchased even if we didn't go the straw bale route.)

With applications of water and fertilizer, the bales start to decompose from the inside. The rotting straw becomes a sterile form of compost, and an excellent growing medium. Regular watering and additional feeding is all you do. No weeding necessary! (allegedly)

Let's get started! First, purchase a few straw bales from a local garden supply store, home improvement center, farmers coop location, or farm. Be sure to get wheat straw and not hay, unless you want to grow a bale of grass. I started with two, and put them out in mid-January. 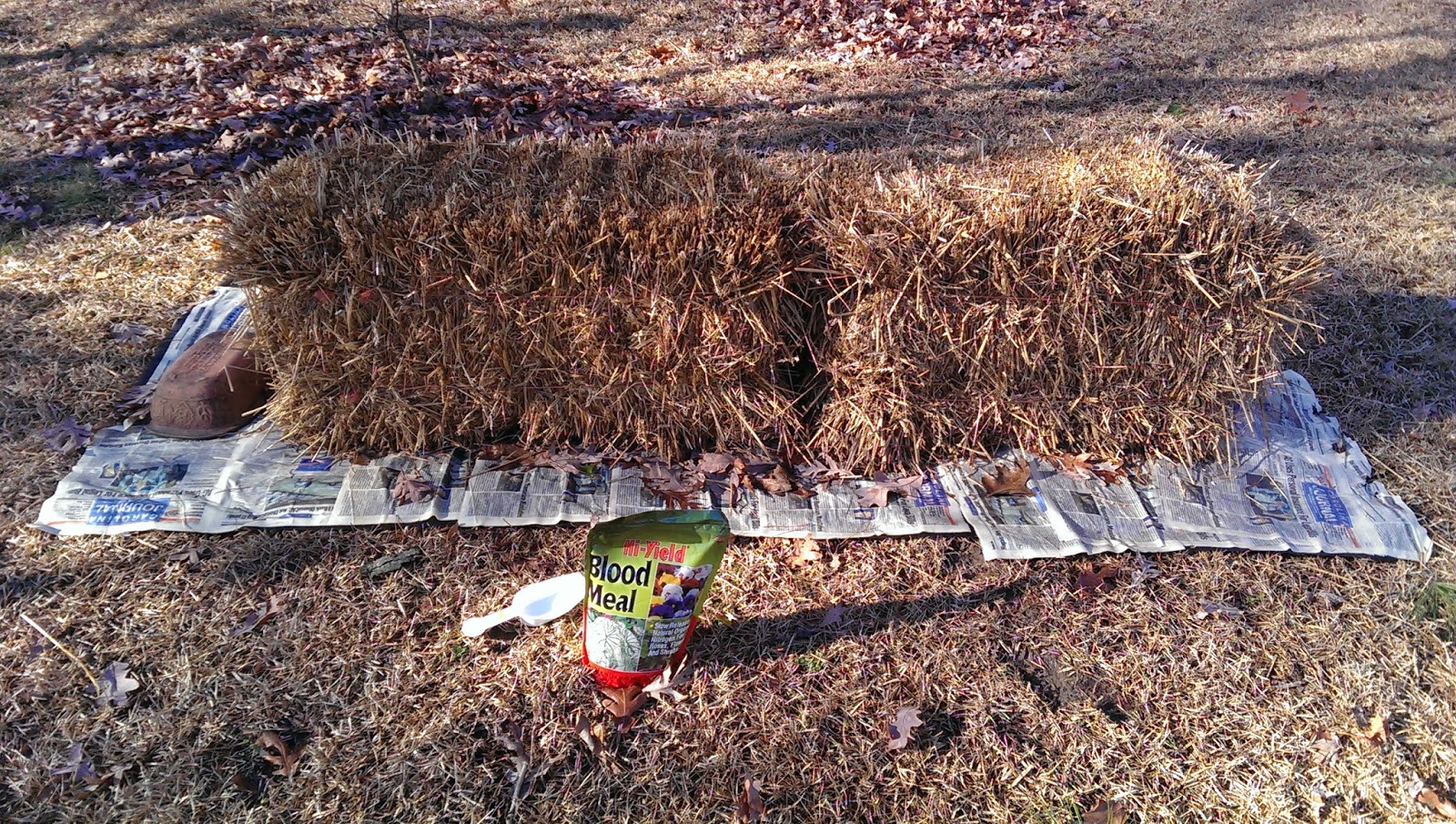 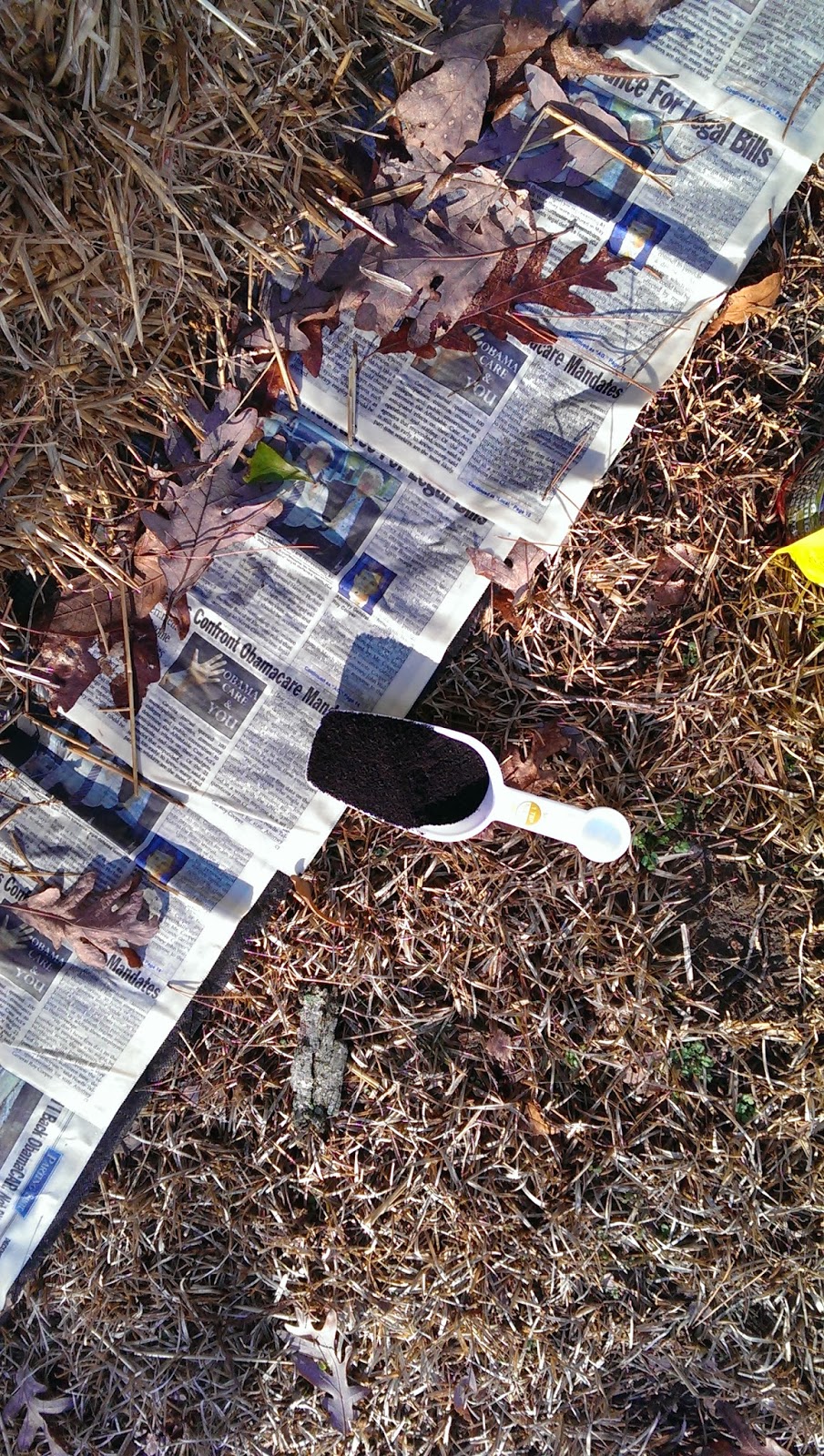 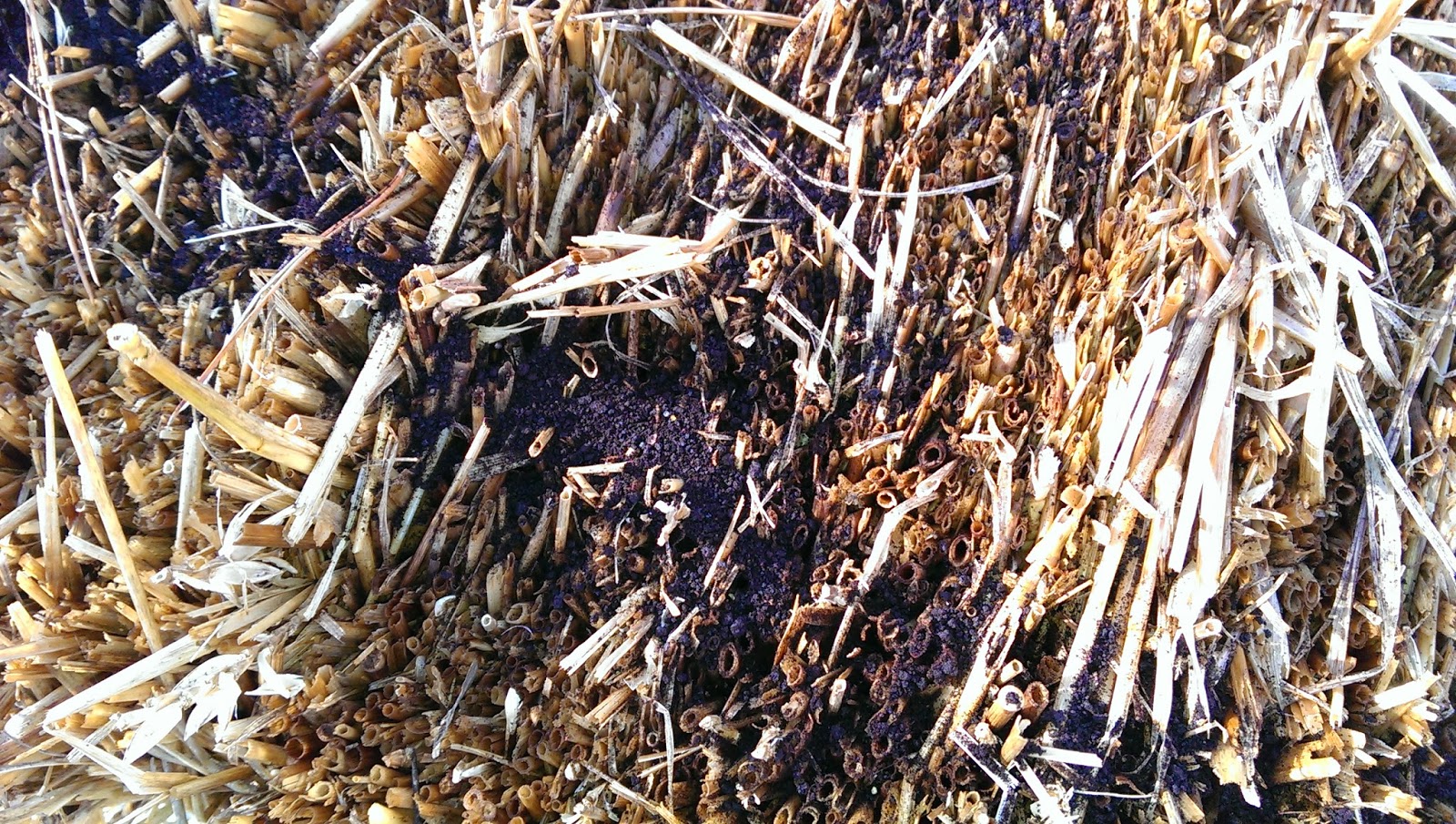 After spreading the goodness on each bale, I thoroughly watered the top to soak in the fertilizer. 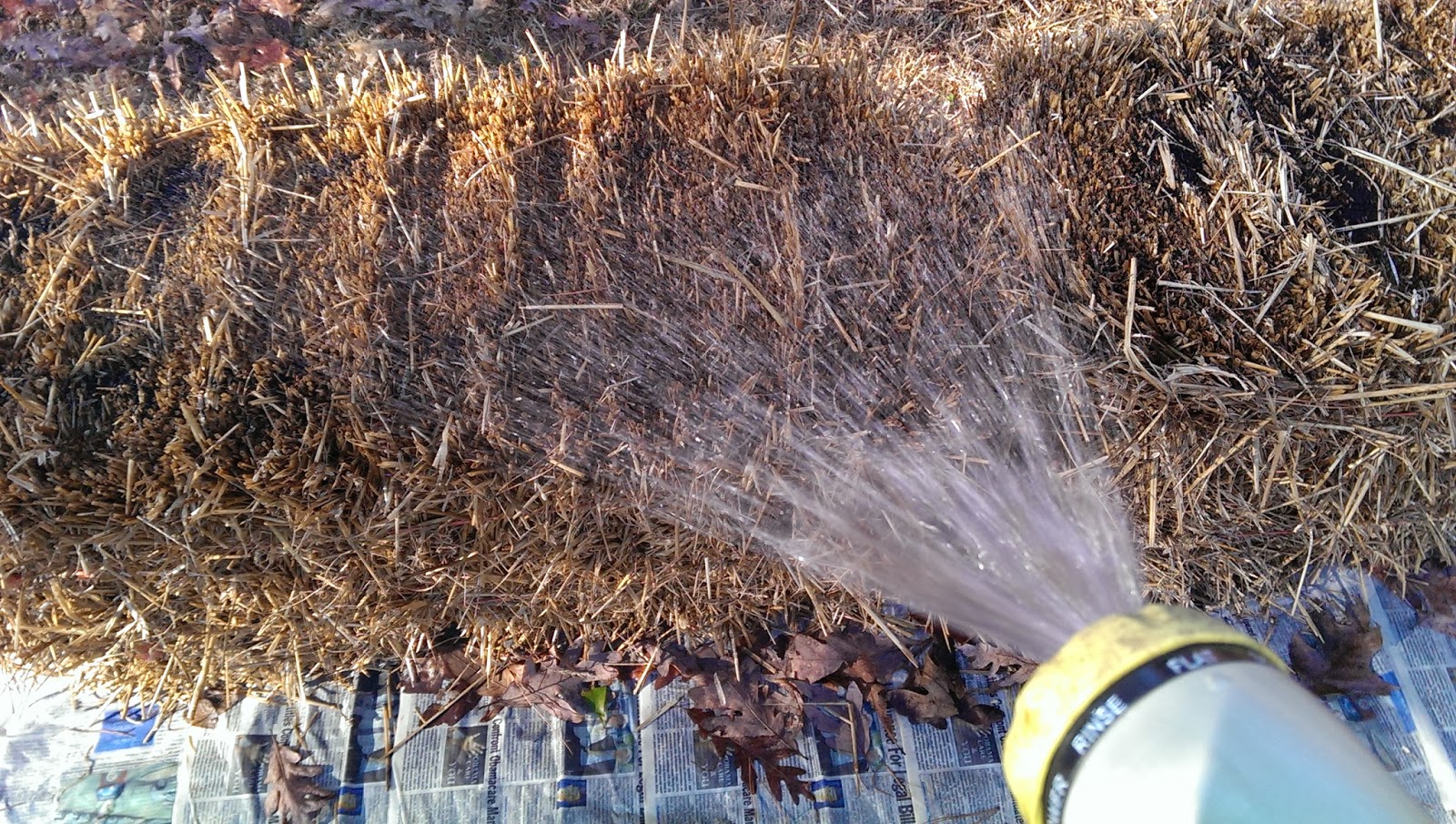 I started this in early January, hoping to plant peas, chard, bok choy, and other cold-hardy stuff first. Then this intervened. 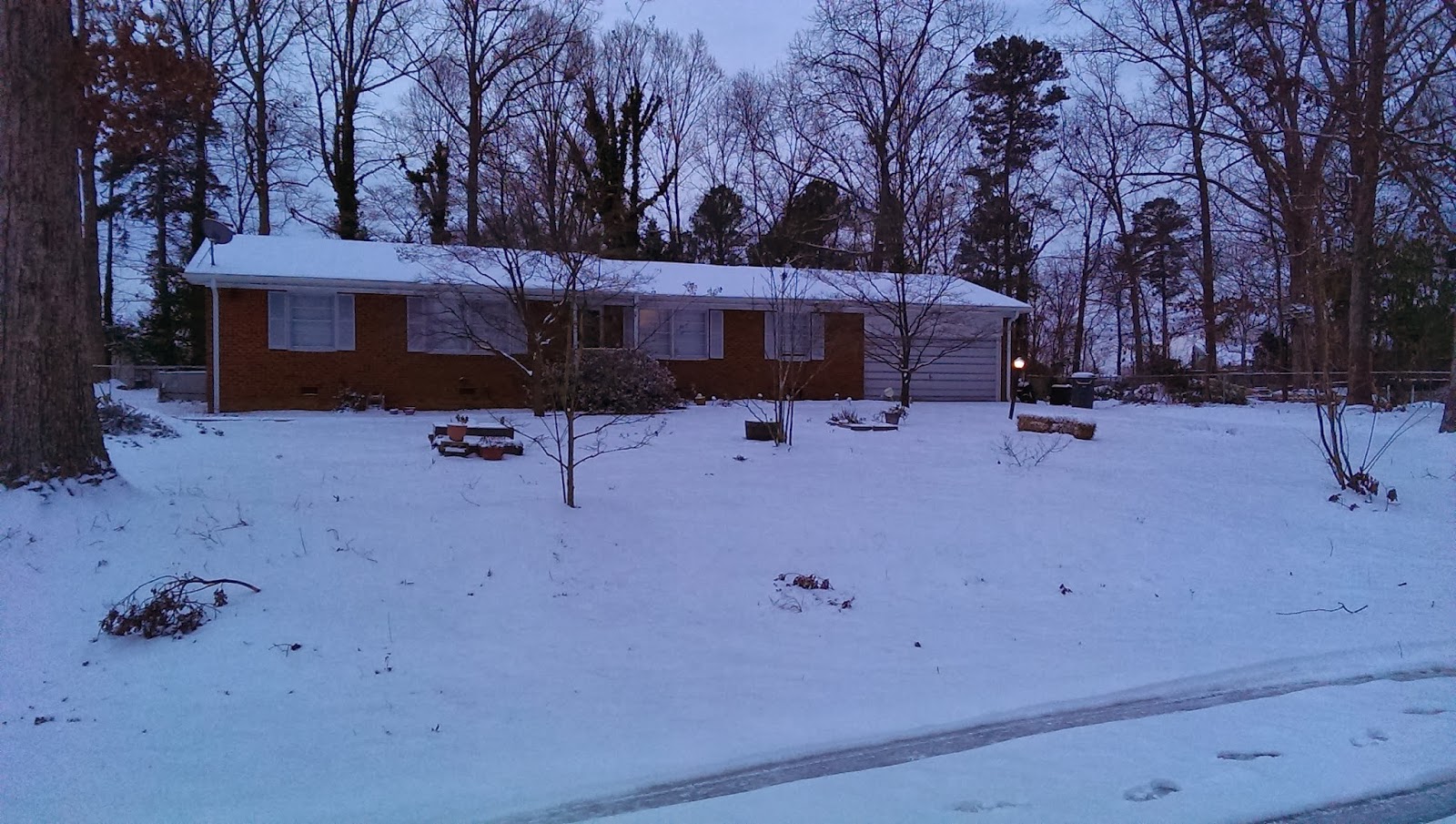 Gardening was on hold for several weeks, as the snows were followed by single-digit temperatures, more snow (here's mid-February), 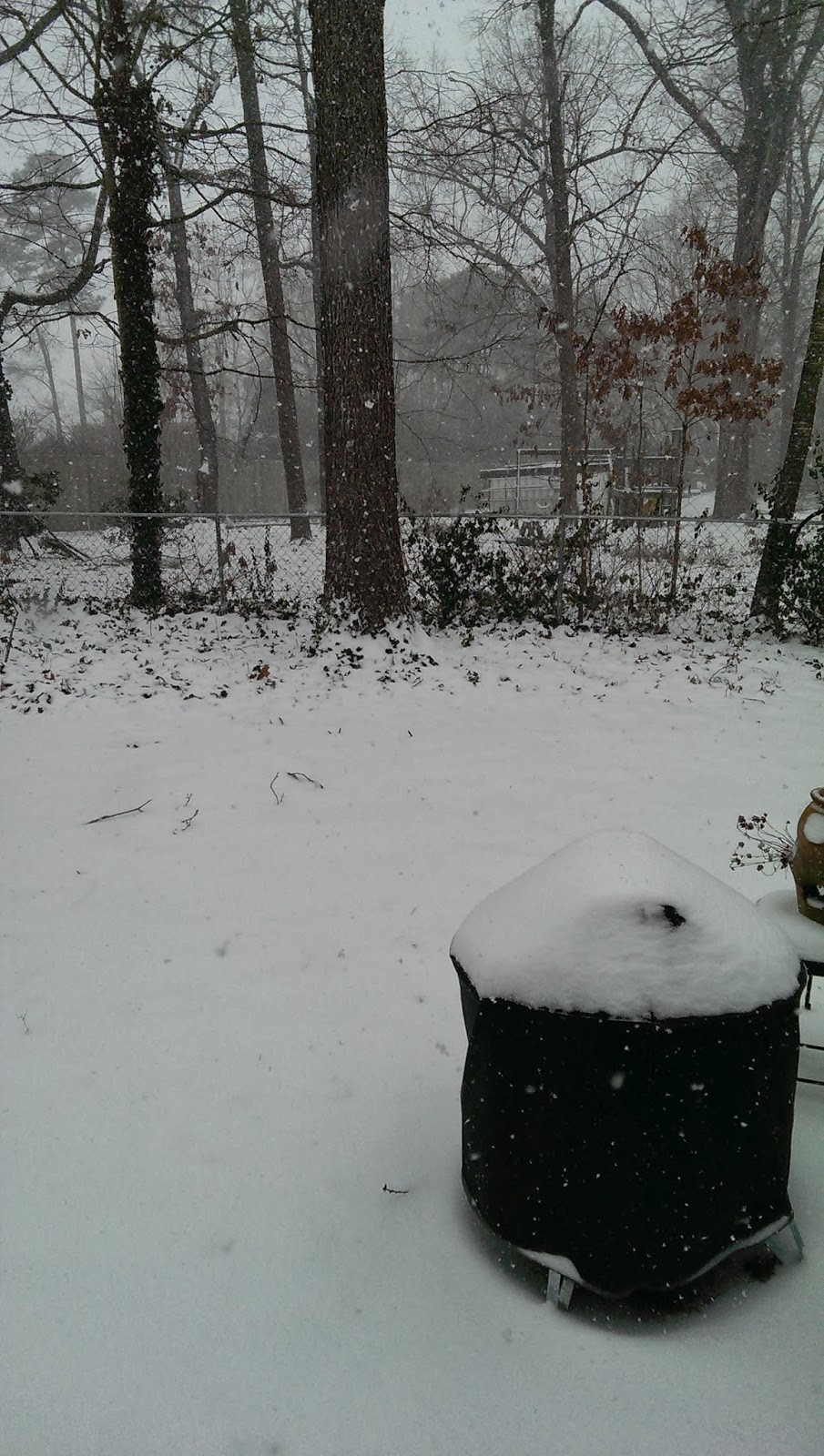 In between the storms, I did set out my cold-weather veggie seeds as Karsten suggested, using homemade seed tape. He devised an ingenious method of spacing seeds in between sheets of two-ply paper towels and holding them in place with a paste of flour and water. It's much cheaper than seed tape you'd buy from a garden center, and you can prepare it in advance and store until ready to set outside. You spread potting mix on top of the bale, put the seed tape on top of that, and then cover with more potting mix. For some reason, I did not document this with photos at the time, but here's what they looked like in early March. The tags indicate what I planted and help anchor bird-netting to keep the scavengers at bay. 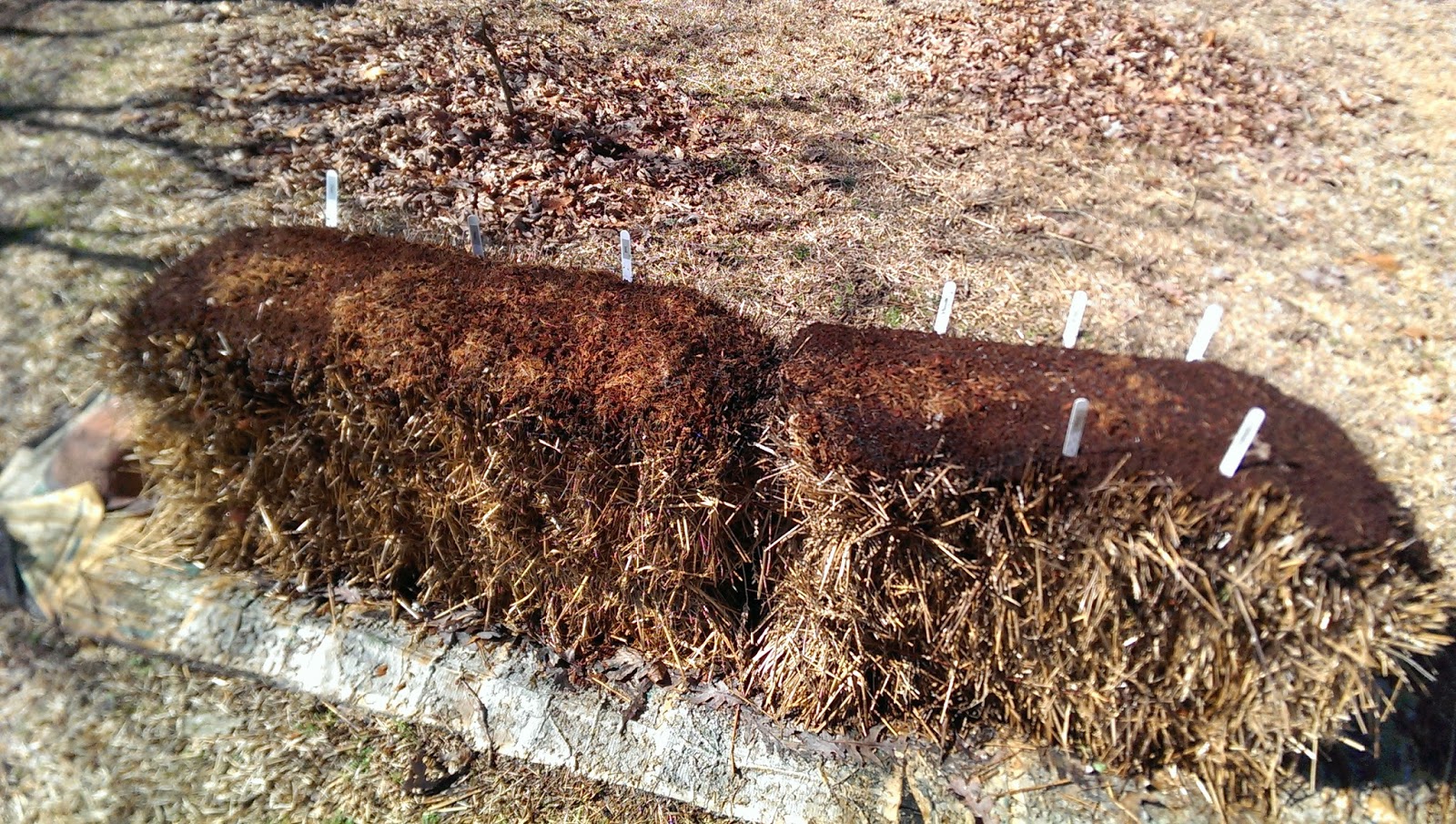 Back to Groundhog Day. I fired up the grow light and started seeds: tomatoes, peppers, cucumbers, eggplant, basil. These will go in the second batch of bales after the threat of frost has ended. 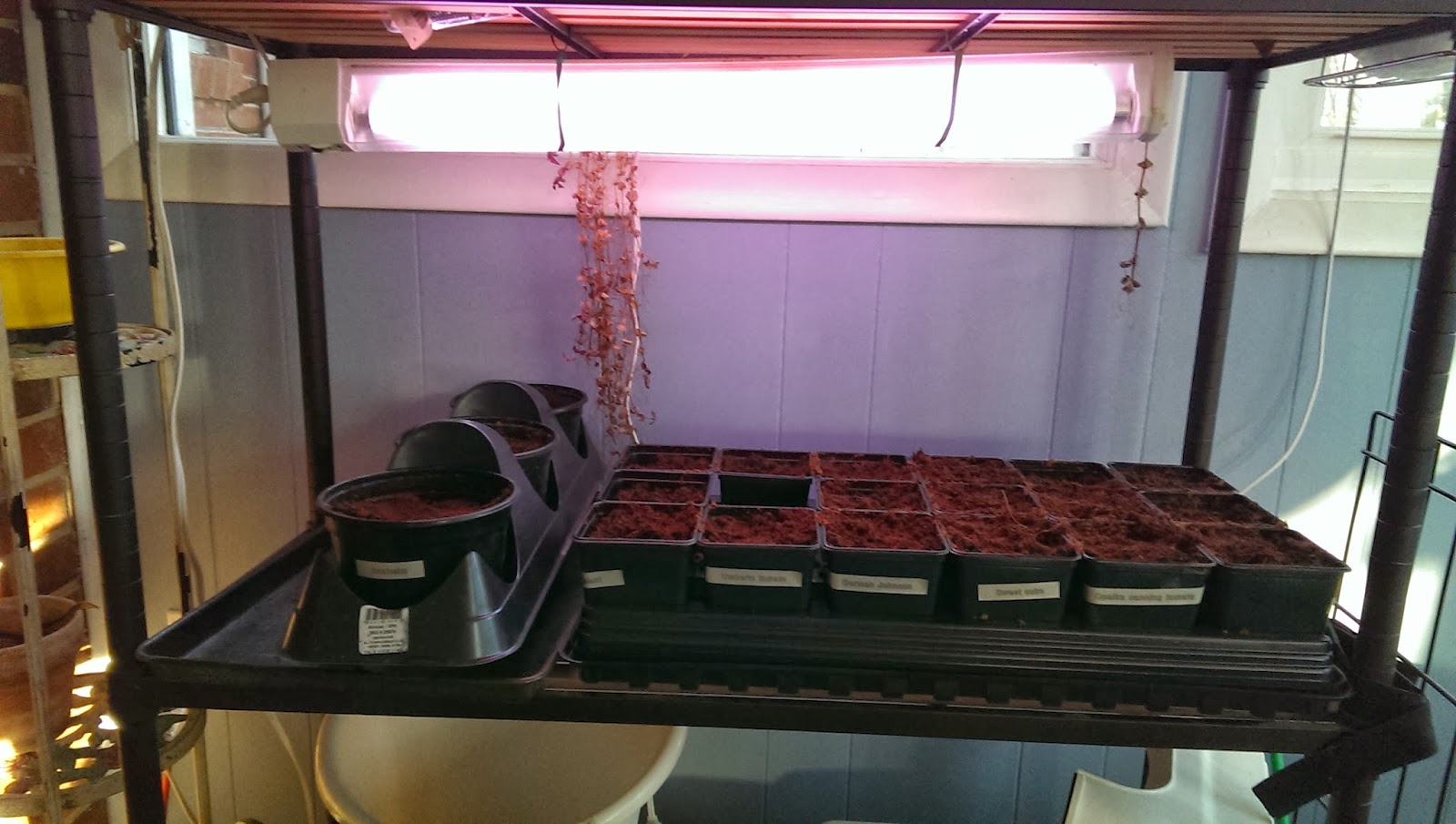 Then ... patience for several weeks. I watered the bales a few times a week to keep them wet. Finally, last Saturday we purchased the last batch of bales. 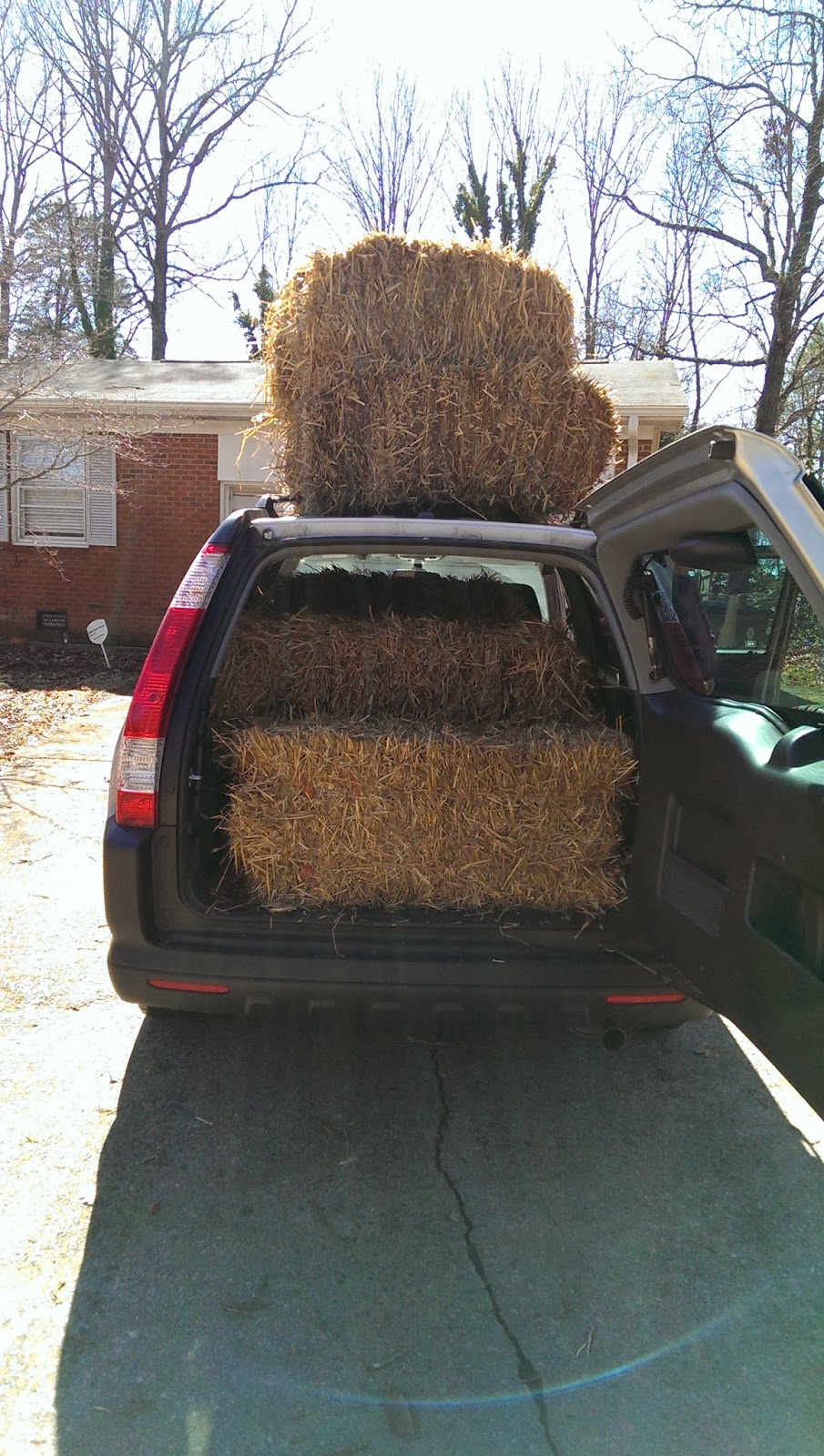 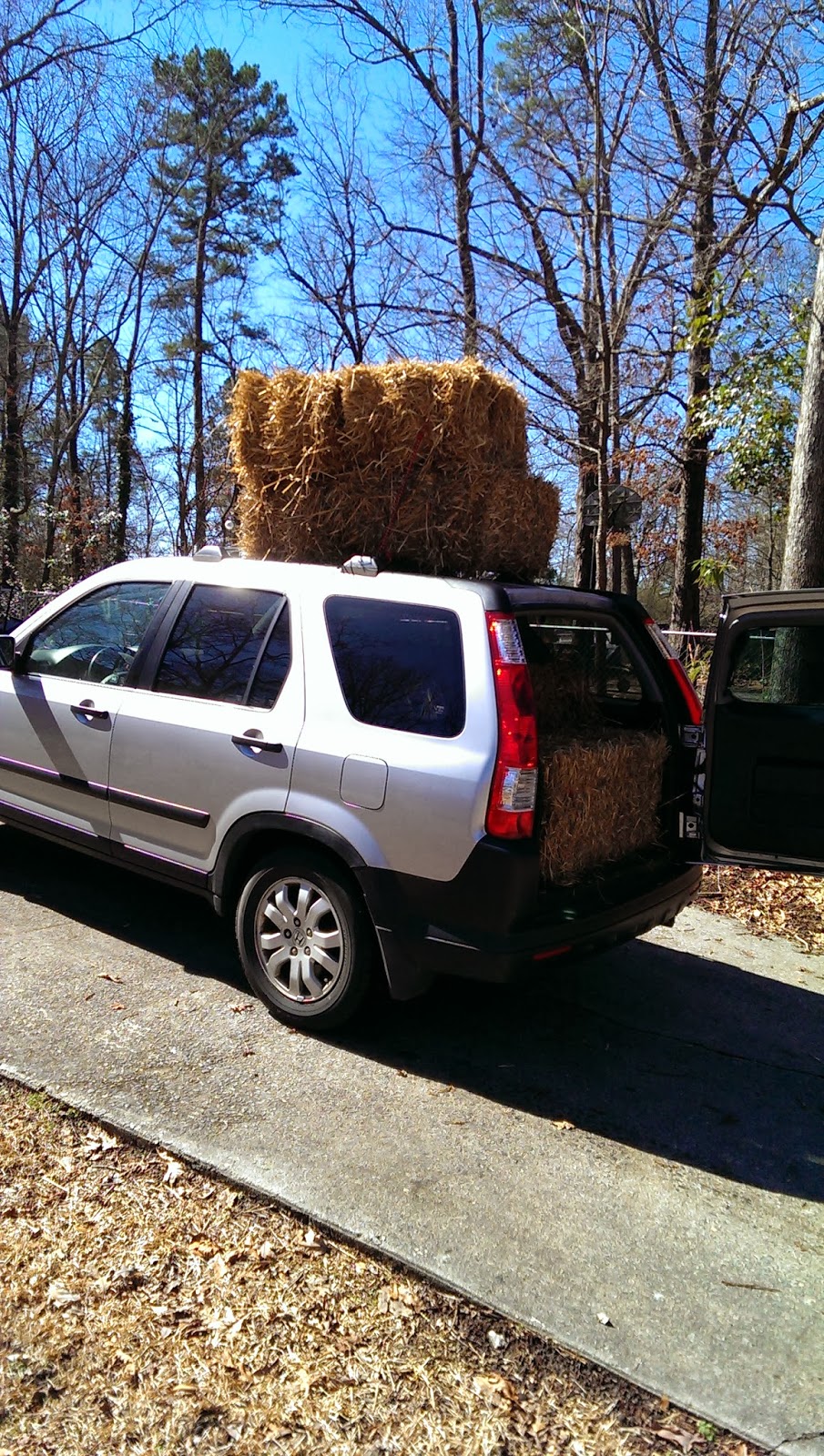 Fortunately, Cara did not disown me for hauling all these bales in and on the car. After unloading them, the prepping process began anew. 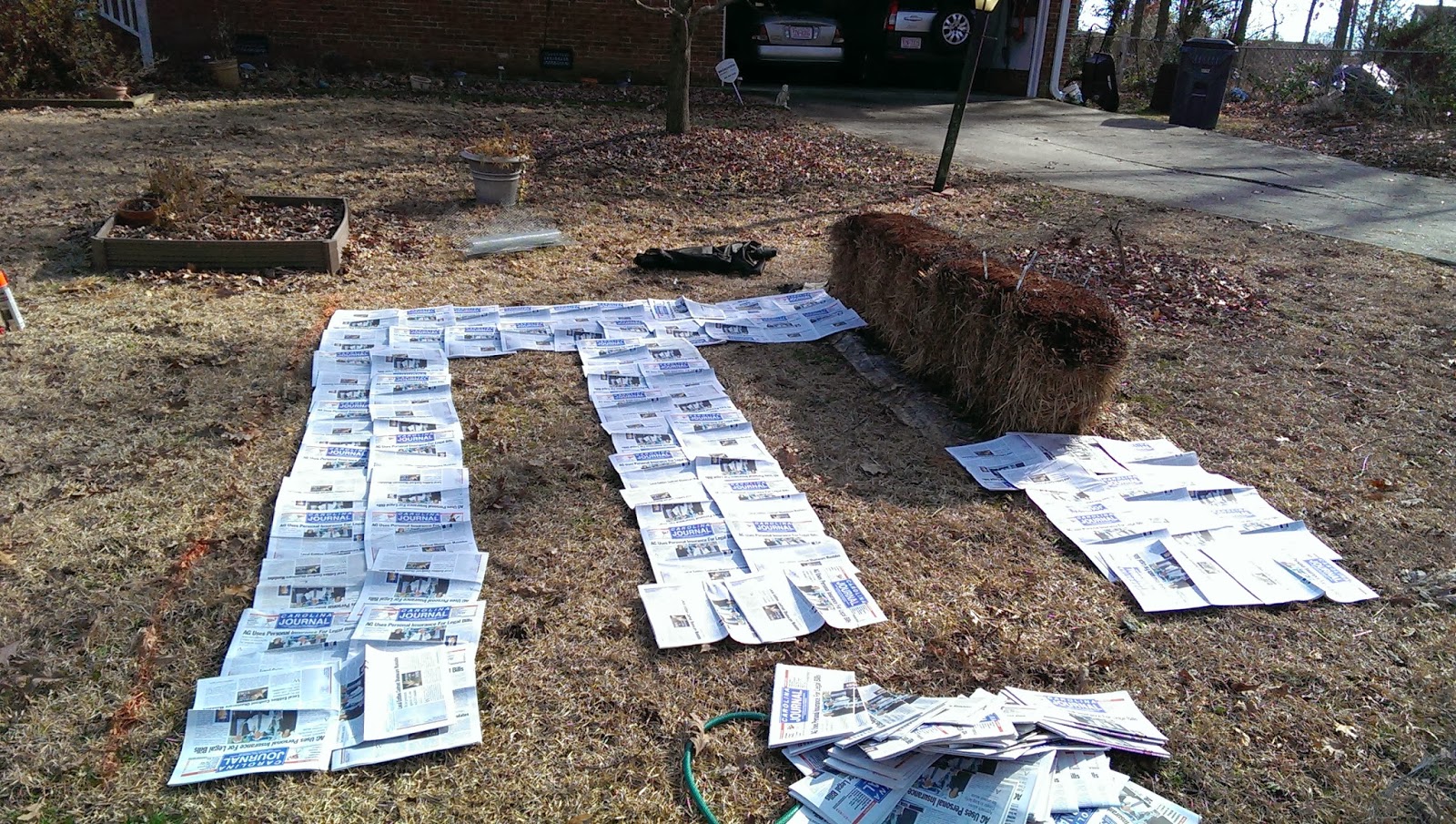 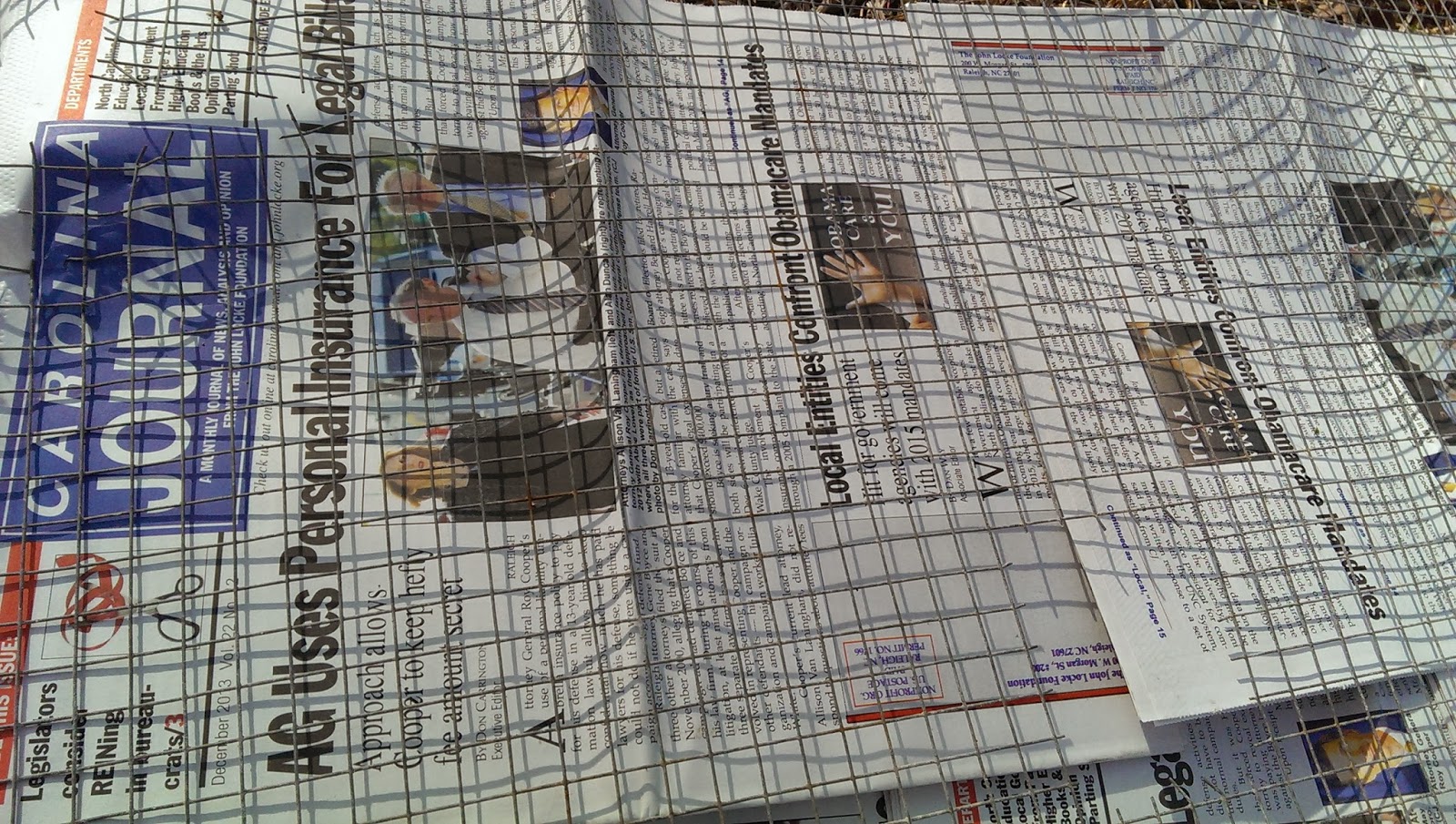 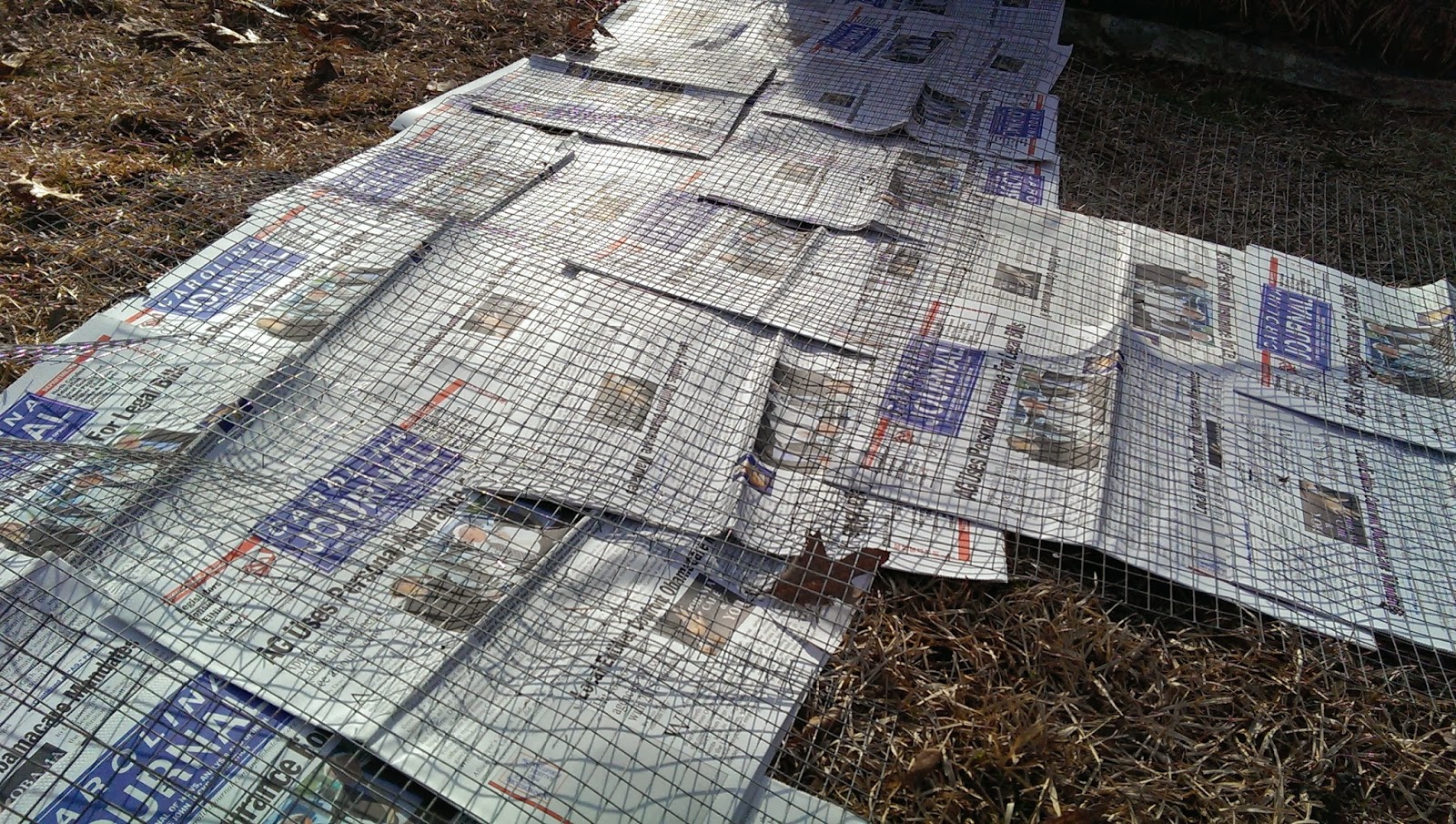 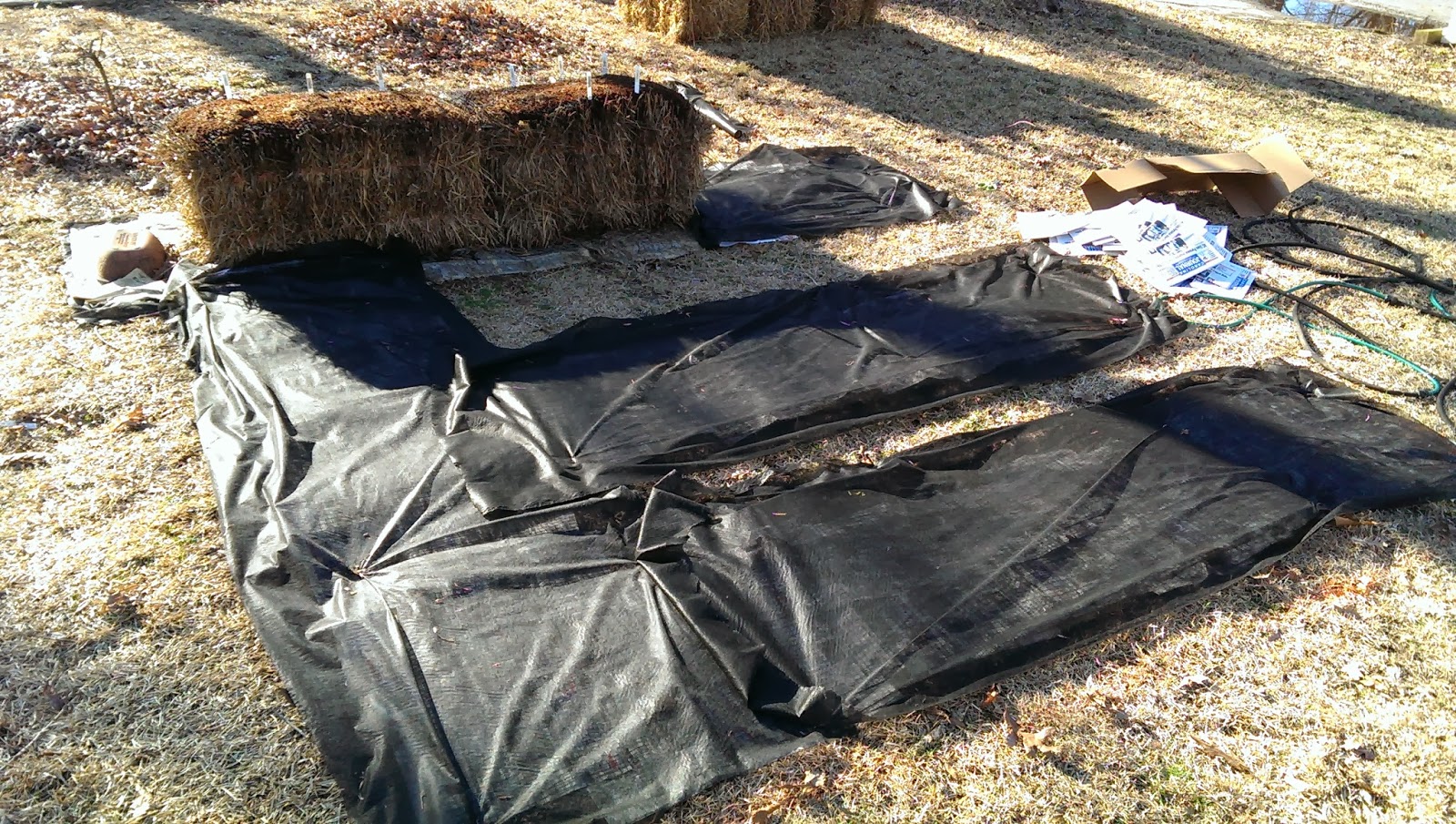 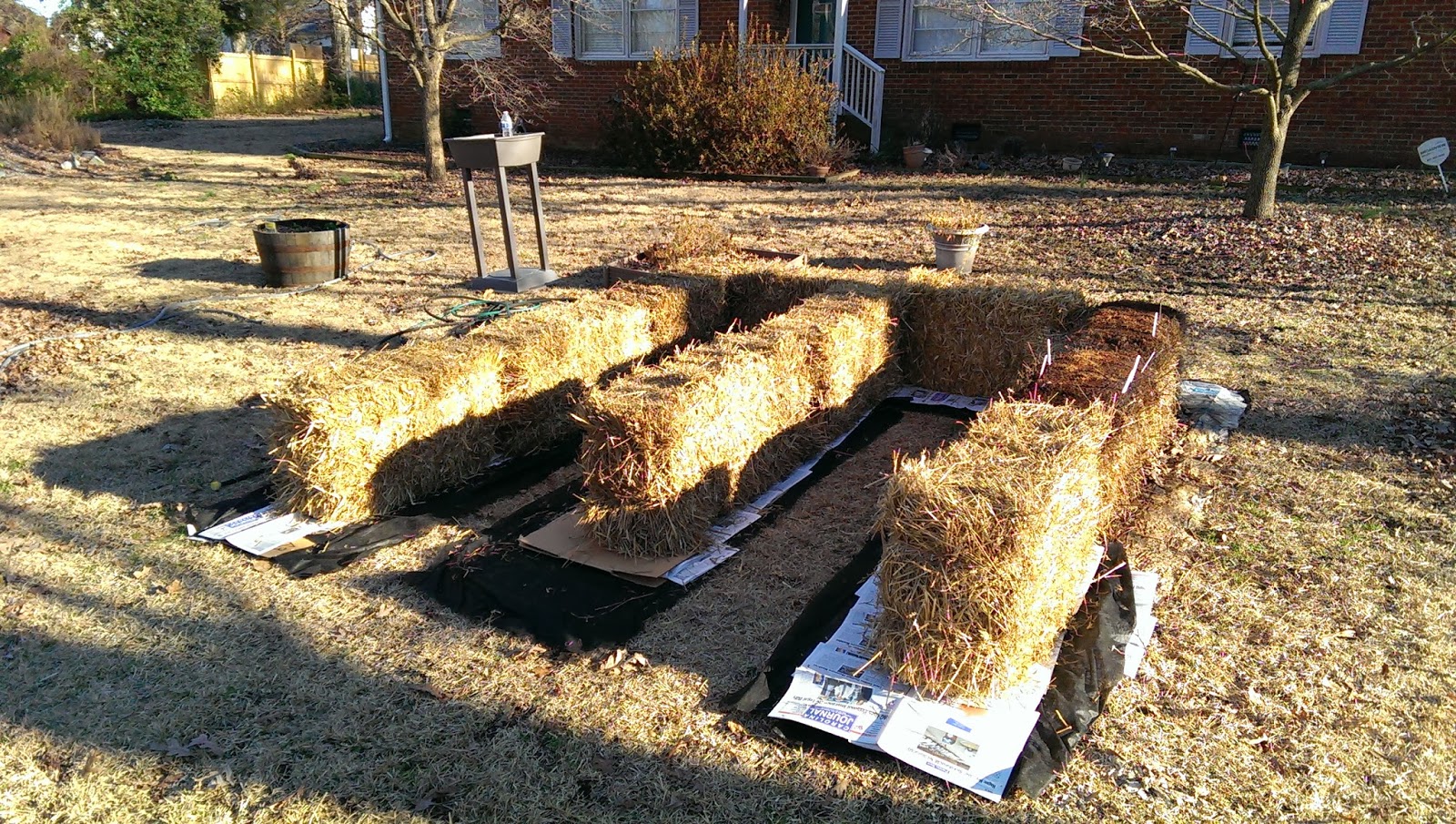 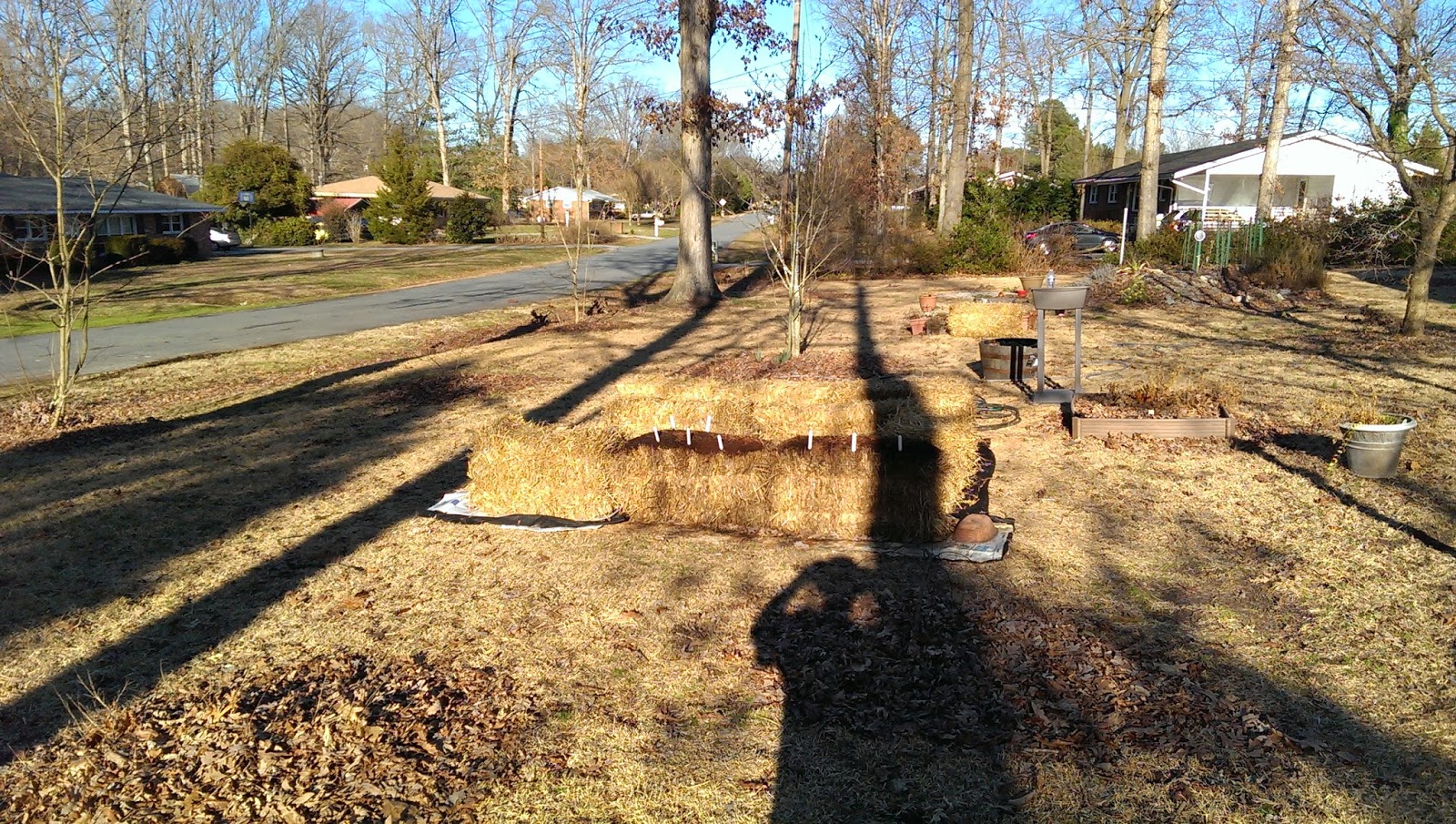 The next day, I filled in the areas between the rows with paper and fabric and covered the entire perimeter with mulch. 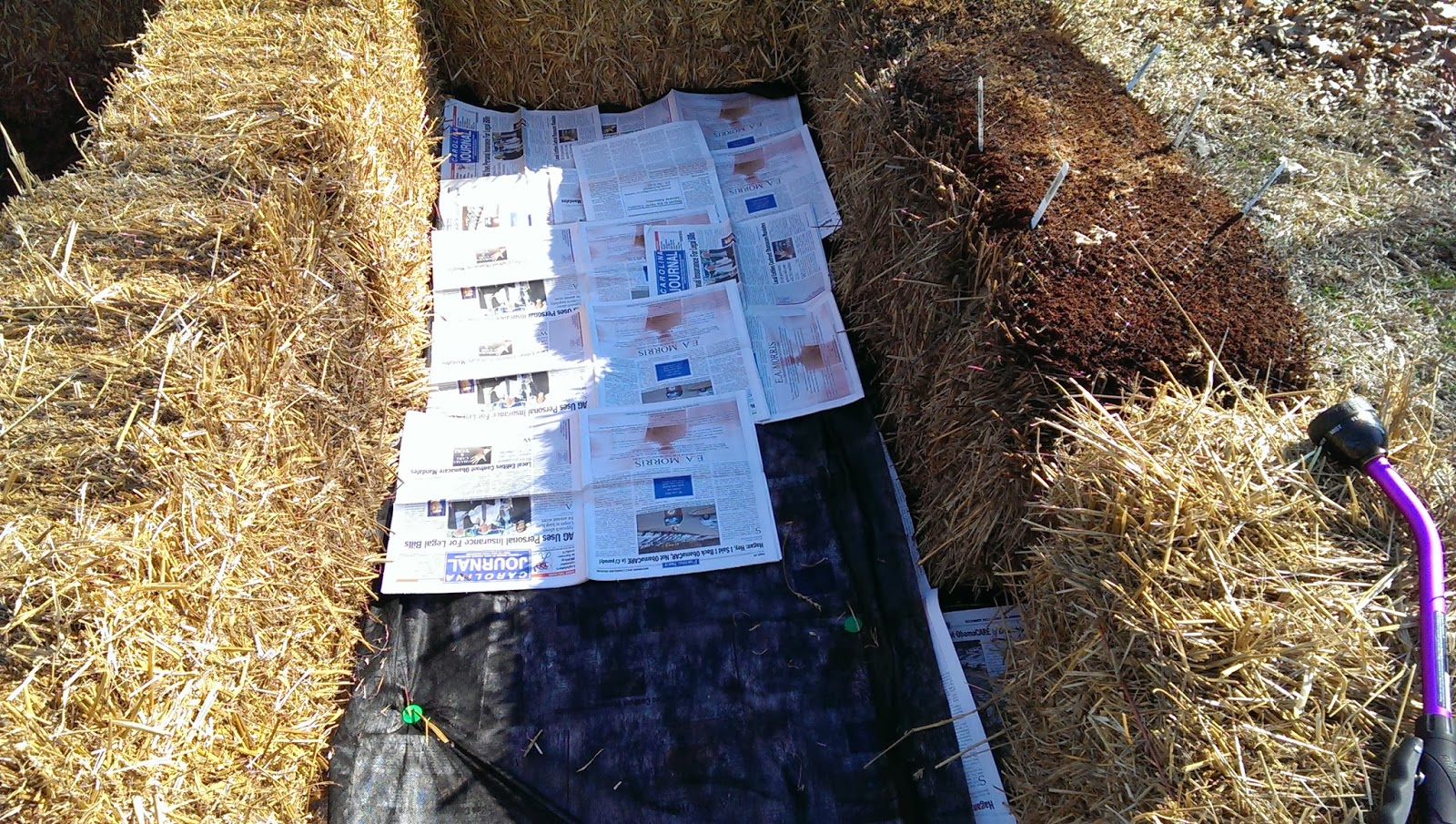 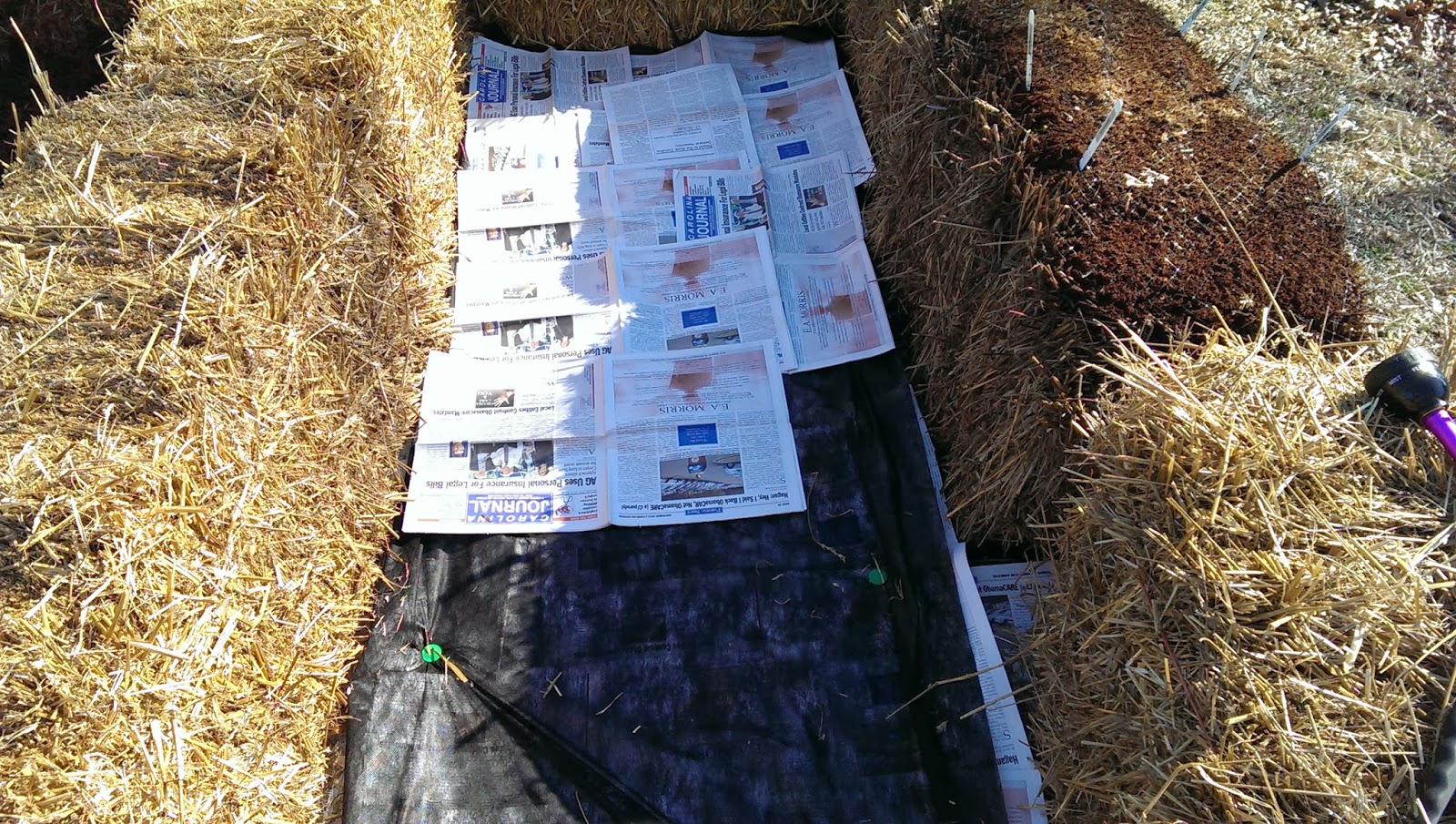 I also moved a standing planter (seen in left top corner) near the area, so I can water everything simultaneously. 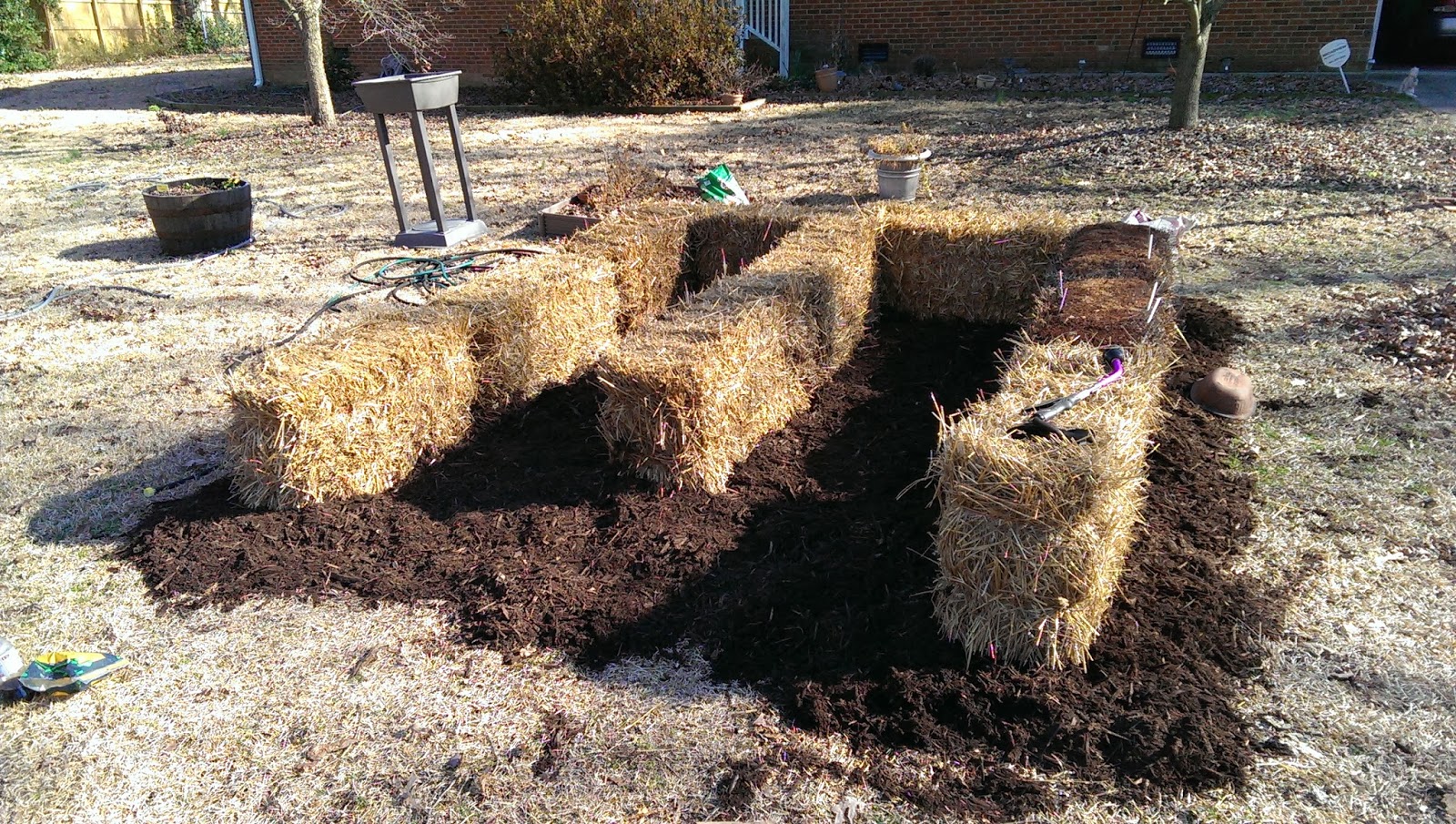 And then, the fertilizing and watering began. 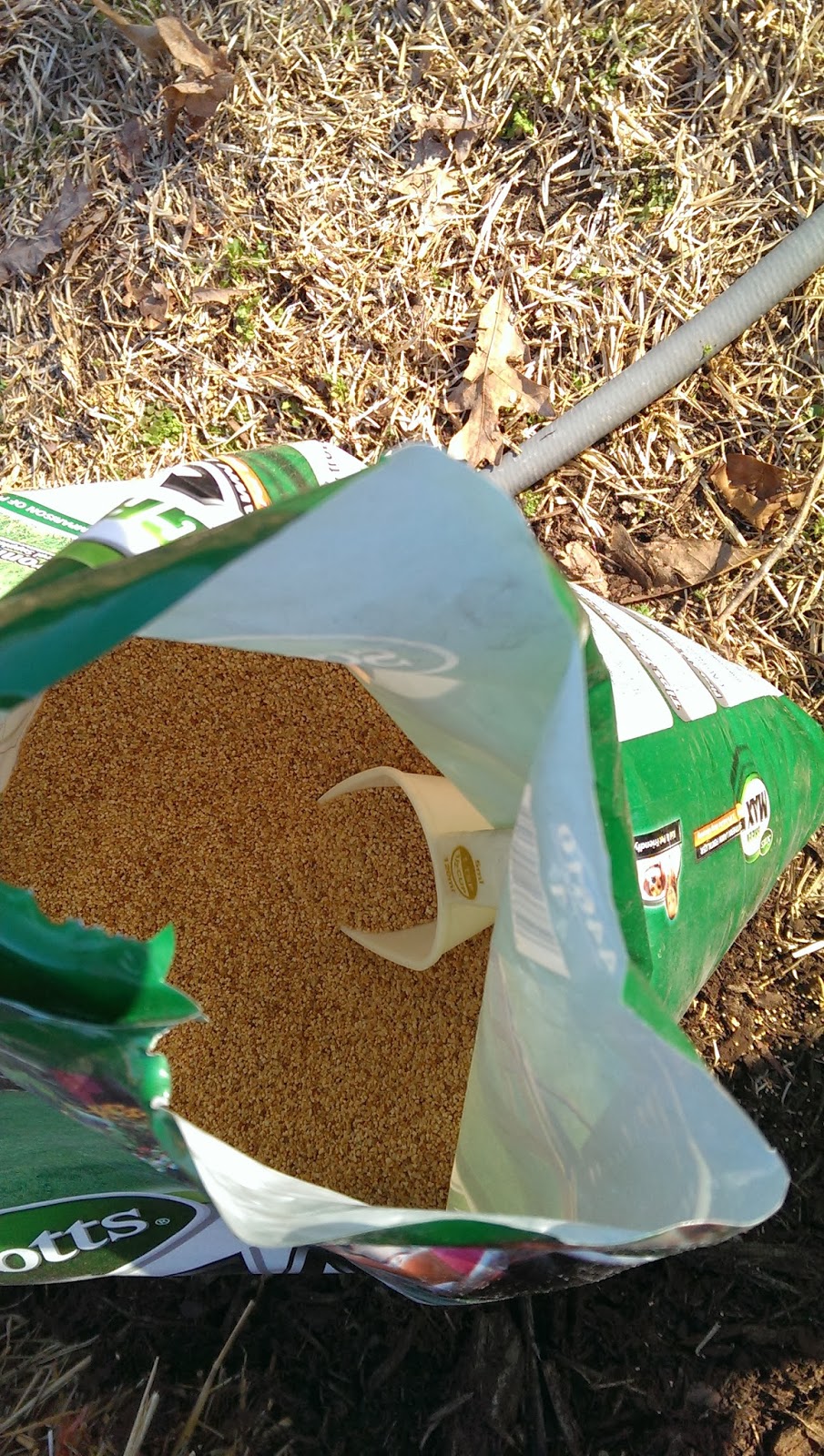 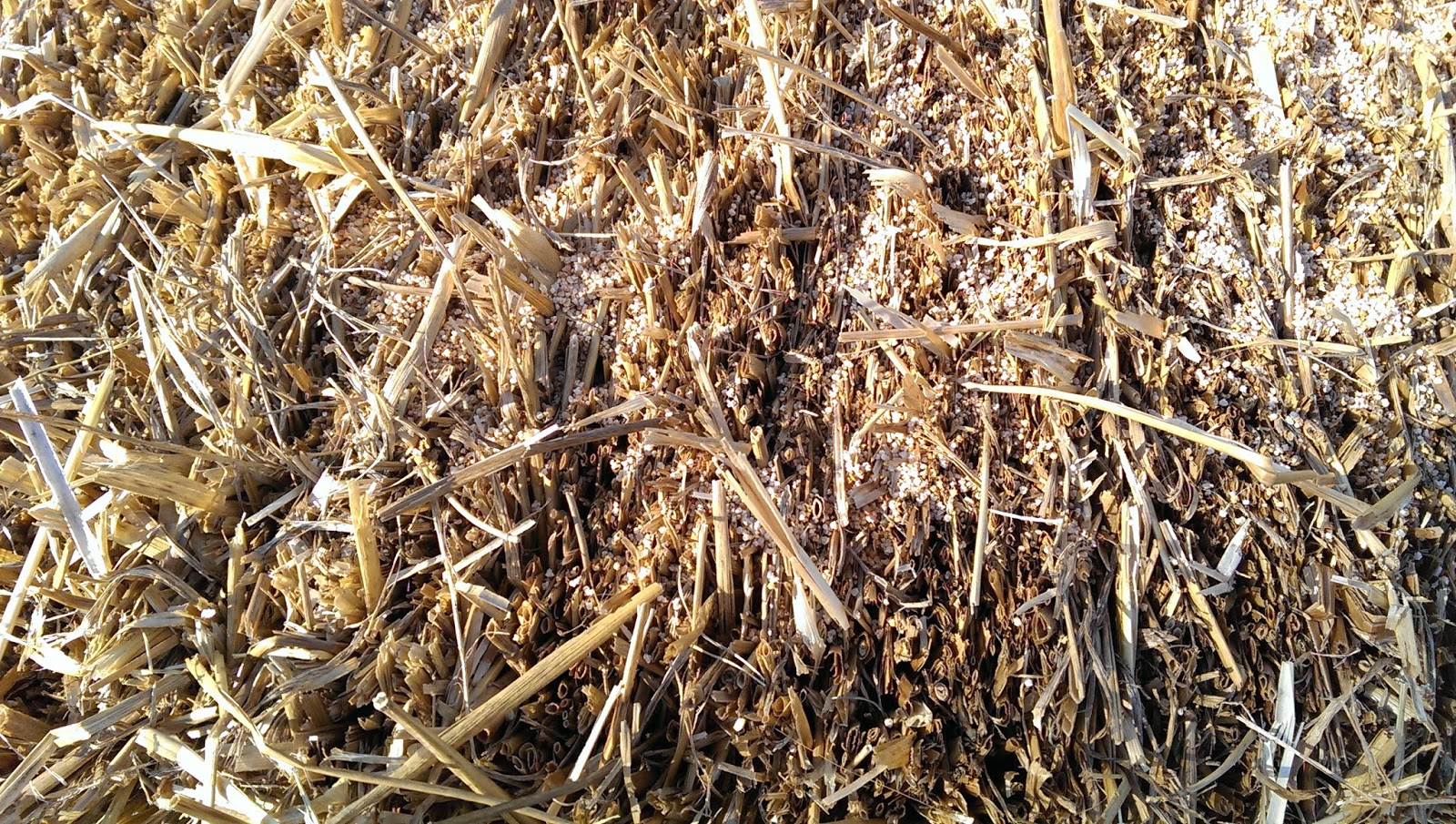 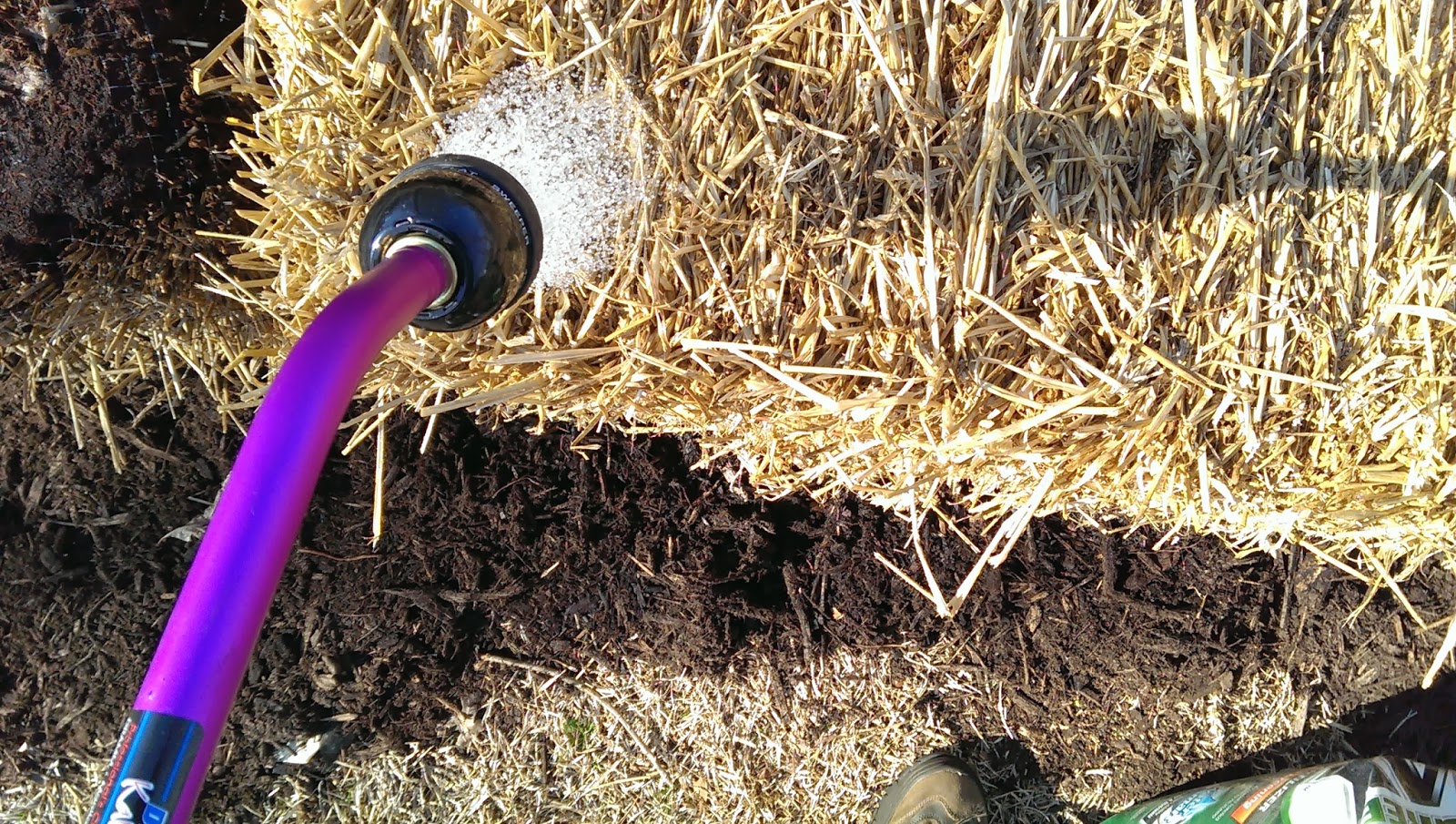 This weekend, I plan to move fence posts from our former garden bed to the straw bale area to provide stability to the bales. I also may install my high-tech deer-frightening technology. With luck, within two weeks, the bales will be seasoned and the seedlings will be large enough to plant outdoors. Stay tuned!