It seems like I come back here every six or seven months, whether or not I need to.

Since my last post, we've lost a beloved family member, Mandy (who left us at about age 110), 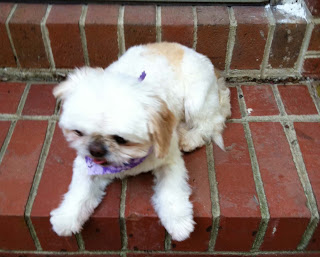 gained a beloved family member (Grover, who's a genuine hoot, sweetheart, and the king of the daily walks) 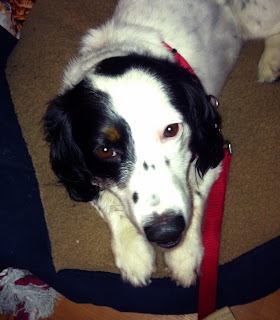 and appear to be on the verge of losing another beloved family member (the wonderful Nano, who's about as broken-down as Mandy was when she passed on). 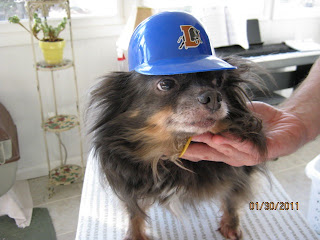 We've also traveled and gardened and rearranged furniture and I've enjoyed covering an election cycle in a role much like that of the metro editor of a capital daily. (Carolina Journal's election coverage is here.)

I'm still stunned about the outcome of the election, not because I thought Mitt Romney was destined for greatness, but because I spent too much time being absorbed with politics and not enough time enjoying life. I mistakenly thought that because North Carolinians were jacked up about the election, that energy was present across the country. (Turnout in the Tar Heel State was nearly 68 percent, about 10 percentage points higher than the national average. Wow.)

Moreover, I believed the hype that Americans would never re-elect a president with such a dismal record, particularly when Republicans nominated the best candidate who chose to run, and someone inoffensive in a Ward Cleaver way. Also, I kept hearing the talk that we were ready for someone who could mend some of the wounds in our civic life, and who better to do that than a clean-cut, family man (who's perhaps more generous than wealthy) like Romney?

(For the record, had Romney won, my projection was that his place in the presidential pantheon would land somewhere between GHW Bush and Bill Clinton, sans the bimbos. A gentleman's B or C, most likely.)

But who could have guessed that, in a low-ish turnout election — perhaps 8 to 10 million fewer voters than in 2008 — Republicans would lose? Isn't that what Republicans usually want? Keep the low-information, unmotivated voters away, and the conservative will win?

Instead, it appears that the people who stayed away from the polls — those who vote when they think it's worth their while — were largely Romney's people, many blue-collar or rust belt whites, a lot of them underemployed or unemployed. Romney didn't connect with them; neither did Obama, so they stayed home. When all the votes are counted, Romney may wind up with fewer votes than John McCain got in 2008. Obama may have gotten fewer black votes than he got in 2008 as well (my guess is, those conservative black preachers whose flocks were angry with Obama's stance on gay marriage took out their anger by abstaining, not by supporting Romney). Jonah Goldberg notes that Romney got fewer votes than George W. Bush from Mormons. Yikes.

Without mentioning the presidential race, I addressed one of the reasons Romney lost in a column published this week in Carolina Journal. Discussing the successful run of Republican Gov.-elect Pat McCrory, I said he

offered voters an appealing résumé combining public service and business experience, along with an optimistic vision for the state. He was an attractive candidate with ideas that met the times, showing that it takes more than money or organization to win an election. You need a sensible, relevant message and an effective messenger.


Among Romney's problems were his failure to break out of the image of the brainy yet pleasant technocrat he's offered since he lost to McCain in 2008. (BTW, I'm beginning to believe that had Romney somehow won the GOP nomination in 2008, he may have defeated Obama, because Romney's business acumen was exactly the image someone needed to project during the economic crash. Obama had no way to counter it. But I digress. I warned you this was disjointed.)

So, what now? I've read and heard enough ugly, snarling election postmortems over the past 72 hours. I've heard despair and anger, people saying the election offers clues — not good ones — about the worthiness of Americans to govern themselves. (Really? Is that where those on the right, broadly speaking, want to go?)

I also fear that a lot of conservatives were investing way too much in the outcome of the election. Like the legislator who believes that once a law passes, the problem it was intended to address has been solved, many seem to think that a Romney election miraculously would have fixed Washington.

Maybe the irrational despair will play out soon. I hope so.

Glenn Beck, of all people, was having a discussion this morning with his sidekicks about who was the best James Bond (Beck's leaning toward Daniel Craig), and when one of the fellows admitted he wasn't a Bond fan, Beck almost told the guy to turn in man card, after inviting the whole crew to his house for a Bond marathon.

One of the distinguishing factors of the classical liberal viewpoint, broadly speaking, is that we are more than political beings or economic actors. Civil society matters. The "little platoons" Edmund Burke spoke about — family, community, faith, culture — should define us more than our views on marginal tax rates or immigration reform.

Over the past couple of years, a lot of my political-minded friends seem to have lost that mooring. Maybe I have, too — from necessity, in part, to keep our publication up to date.

The energy I have for work is as strong as ever. We'll have the first legislative session in 140 years under Republican control with a Republican in the Executive Mansion. The policies I believe in (and that my JLF colleagues help formulate) will be more relevant than ever.

But I also plan to step back more when I'm off the clock and pay heed to other very important things. Fun things. Entertaining things. Enlightening things.

I would urge those who also believe in liberty and self-government do so more of the same — while not abandoning the fight.

We do have a messaging problem, and we must fix that. In the meantime, take in a movie. Go to the park. Kiss your spouse and hug your kids. Play with your pets. Keep calm and carry on, as they say.