2011 marked my fifth Merlefest and Cara's fourth. Last year, we swore we would not attend more than two days of the four-day festival. No matter how wonderful the music, how delightful the surroundings, and how enjoyable the company might be, spending more than 20 hours in the elements is too exhausting at our age.

So, of course, we ended up buying passes for all four days of Merlefest this year. We survived three (and would have made all four had we not both spotted the first signs of colds Sunday morning).

The original plan was to go only Friday and Saturday, but lineup was so strong this year that we decided to shoot for the entire weekend.

Good move. The weather was ideal -- highs in the mid-70s, night temps around 50. Sunny every day. From the initial counts, the initial counters put attendance at just over 80,000 for the weekend, in the top three all time.
We added Thursday when our friends the Wehrmanns got us tickets to the Wilkes Chamber Night event. For the cost of a one-night pass, the local Chamber of Commerce provides a buffet and reserved seating. Plus, the Del McCoury Band (my favorite performer among the long-time bluegrass artists) were on the bill that night. We bought a three-day pass including Sunday when Robert Plant and the Band of Joy were added to the schedule a few weeks ago.

Corb Lund and the Hurtin Albertans. Part Ian Tyson, part Hank Snow, part Marty Robbins, and a little Bob Wills thrown in for good measure. As my friend David Milstead told me on Facebook, "Sometimes I wonder at the ability of one person to write so many good songs. Particularly one person you've never heard of before."

Here's the band at the sound check on the Hillside Stage. 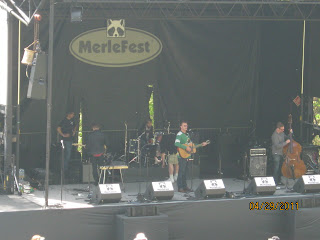 Harper and the Midwest Kind. I have little use for most jam bands, but these guys are good. Harper (from Australia) plays harmonica, John Popper-style, and -- yes -- a didgeridoo. The rest of the band hails from Michigan. Cara took a few photos on her camera of the band that I'll upload soon. We caught two sets and had fun.

Sarah Jarosz. I saw her appearance on Austin City Limits and had to download her first CD, not knowing she recorded it at age 17. Just another one of those Texas singer-songwriters who plays every string instrument under the sun and has an infectious voice. Among her several sets included one on the Cabin Stage (where the acts perform between sets on the main Watson Stage, so the music never stops) Saturday between Sam Bush and Lyle Lovett. The bookers must like her, because that's prime real estate -- it was the same slot where The Carolina Chocolate Drops made their prime time debut at Merlefest a few years ago. My nieces saw another set of hers where she said she was completely honored to be there. I hope they bring her back. Often.

Scythian. High-energy, kinda-Celtic, kinda-Cajun. Cara wanted an upbeat CD to play at the adult day center where she works, so we bought a copy of Cake for Dinner, their children's album ... and figured we might want to see them play. The CD is perfect, and the show was a blast.

Here they were on the Americana Stage. 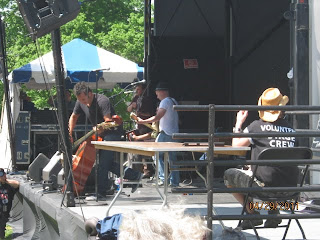 OK, we're easy. We'll watch these guys play every day of the festival if we get the chance. The Friday afternoon set on the Americana Stage included a guest performance by Jens Kruger on banjo, who's surpassing Bela Fleck as my favorite contemporary banjo picker. 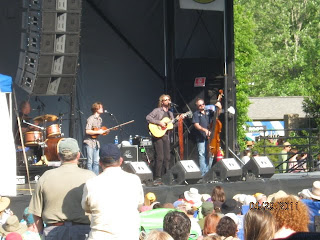 For the album hour, The Waybacks choose a classic rock record and play it in their own style, bringing lots of guest stars on board. It has become a highlight of the weekend, as this year an estimated 5,000 people crowded the hillside and surrounding parking lots to hear the show. 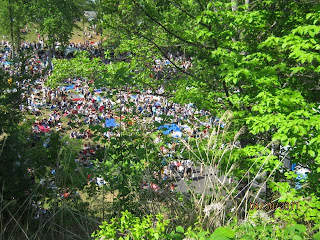 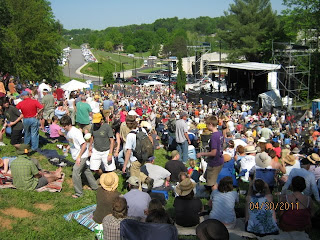 This time they chose the Allman Brothers Band's "Eat a Peach." From the reactions I witnessed, this wasn't as popular as their previous selections (Led Zeppelin II, Sticky Fingers, and Abbey Road). But I think it was their most successful execution. Warren Hood's fiddle made a terrific stand-in for Dickie Betts' slide guitar. James Nash's guitar work was stellar, as always. For her part, Joan Osborne had the perfect voice for those songs. Plus, cutting the interminable "Mountain Jam" from 33 minutes to about 12 was wise. I enjoyed it, but I'm not sure others did.

Sam Bush Band. This is the second time we've seen them this year, and like The Waybacks, we could listen to Sam any time. The Merlefest set was much different from the one they played in Raleigh a couple of months ago, including several New Grass Revival songs and a cover of Jean-Luc Ponty's "New Country." No one holds a candle to him.

The Kruger Brothers. Uwe and Jens moved to the U.S. from Switzerland a number of years ago and have settled in Wilkes County. There are a lot of baroque influences in their compositions, and we find them fascinating. (Don't laugh. I'm taken back to some of the early Focus pieces when I hear them.) Plus, as I said, Jens is a terrific banjo player. We really like them.

We caught part of the sets of Jerry Douglas (he was opposite The Waybacks) and Lyle Lovett (we heard that on the radio heading home). Sonny Landreth put on an impressive performance but his electrified blues were out of place; fortunately, Jerry Douglas joined Landreth for the final number and, as Sonny said, "saved the day."

As I've written before, Merlefest is the most pleasant festival I've attended: best organized, most family/listener-friendly, with the clearest sound and sight lines. Plus, it's a relative bargain. Our Thursday Chamber ticket plus the three-day pass ran $160 per person. Even though we missed Sunday, we saw 17 performances. Try to beat that price.

Next year will be the 25th Merlefest. Will the bookers go traditional? Eclectic? Popular? We'll start to find out in October, when the first acts are announced.

Posted by Rick at 8:55 PM
Email ThisBlogThis!Share to TwitterShare to FacebookShare to Pinterest

I can't wait for the 25th. I NEVER go to Merlefest and go away disapointed. The artists that are invited are stellar. I can't think of a better way remember Merle Watson, esp. since Lyle Lovette mentioned that he used to open for Doc and Merle Watson when they toured in Texas. So many of the artists knew Merle and can honor him with their gift of music.