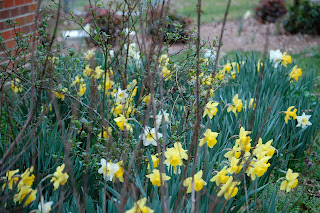 Greetings, folks. Anything happen while I've been away?

We've bought a house -- a classic early-'60s ranch -- and moved to the east side of Raleigh. The sellers were under contract with another buyer last summer and fortunately for us, the deal fell through. So the sellers didn't really tend to the lawn or garden from about June until we took occupancy in February.

We inherited some cool stuff -- a hydrangea, a lot of azaleas, some hosta, several columbine, and other perennials. 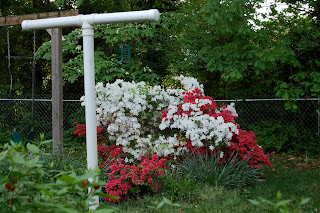 And a lot of things we were not attracted to. Like ivy. It was all over the side and back of the house. You know what ivy does to a brick house? Attaches to the brick and mortar and pulls stuff apart. I mistakenly did not take a picture that did it justice. 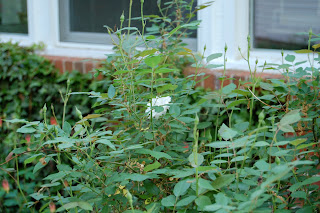 Pulling it down and killing it was quite the chore, especially since it had become intertwined with this massive hibiscus. 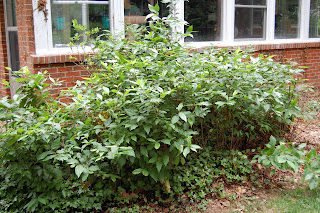 The only way to kill the ivy was to take out the hibiscus, too. Easier said than done. First, I chopped down the hibiscus with the hedge trimmer and pruning shears. 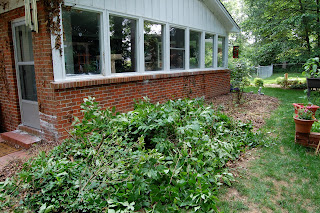 Then I tried to dig it up. No dice. The roots were broad and deep and pervasive. But Dan The Man came through with this suggestion: Pour about a gallon of heavily brined salt water on the base of the hibiscus. (Or hit it with Roundup.) I did both. And waited about two weeks.

We had done a lot of other work, planting flower beds, and several containers, and freshened the place up quite a bit. We're having folks over next weekend and wanted it to look as spiffy as possible given the magnitude of work needed and the short time to do it. 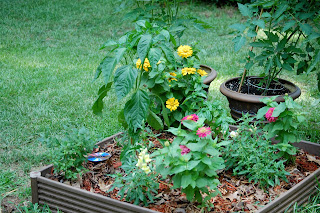 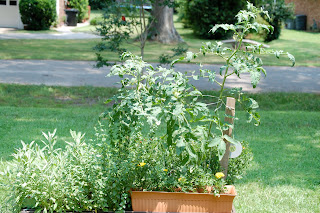 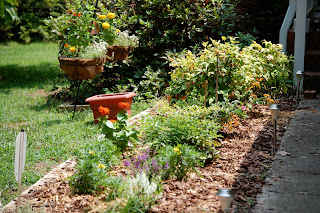 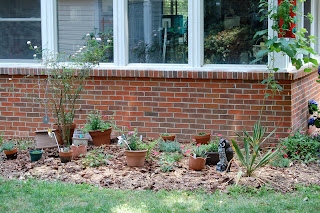 A lot of trial and error, figuring out proper light and water.

And this morning, I tackled the hibiscus again. Dan's remedy worked! It was not exactly an easy task, particularly with the heat index in the 90s, but I did it. 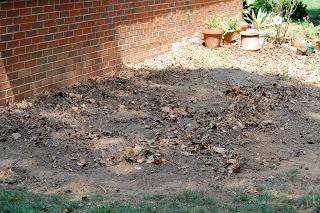 And here's what I pulled out of the ground. 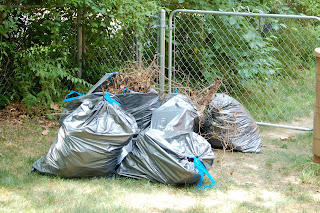 Because the hibiscus had deep roots and the ivy shallow ones, I had to tackle each division of the hibiscus separately. But I got that sucker out.

Meantime, this is our second season using Topsy-Turvy planters. We're fans. Last year we hung one on our apartment balcony (putting it up in late June) and still got a couple dozen tomatoes. Hang them in a spot with plenty of light, and water and feed the plants regularly, and they do a great job. Plus, you do not have to worry about most of the pests that invade veggies that are planted in the ground.

We have one with a tomato, one with a cucumber, and one with a zuccini. In the second image below, the planter on the right is the one we used last year. 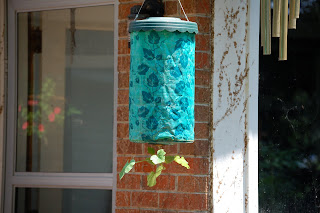 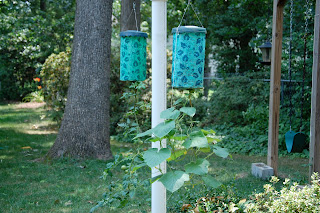 Then there's this "strawberry" planter, which has 15 ports rather than one, and I planted two cucumbers, a chile pepper, and several annual herbs (basil and parsley). We've harvested one cucumber and another should be ready today. Lots more blooms on there, too. 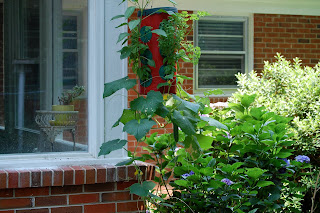 The local Walgreens had the strawberry planters on sale for $7 and I bought two more for next year. (Topsy-Turvy sells a "pepper" planter which is a half-sized strawberry planter with seven ports rather than 15.) I think we'll use one for annual herbs, another for various peppers, and our veteran for squash and cucumbers. I also want to buy one of the Topsy-Turvy trees, which can handle multiple tomato plants. We saw one at a garden center and I'm hooked. We may not plant any tomatoes in the ground next year.

Being a sucker for garden gadgetry, I also bought this upright tomato/veggie stand. You let a tomato grow upside down in the center port and then put other veggies/herbs/flowers in the bed on top. So far, so good. 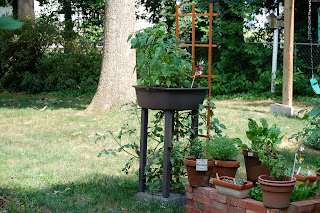 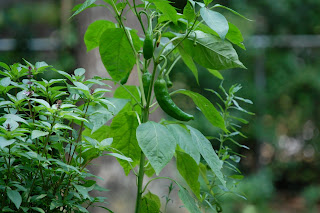 As you can see, the tomato and Anaheim chiles are doing fine.


Back to the hibiscus hole. After removing all the roots, etc., I nuked it again with Roundup. The next step is covering the hole with newspapers, putting down landscaping cloth, and covering everything with dirt and mulch. (And containers.) That's tomorrow's task. If this killed the ivy, then next year we'll plant stuff here.