In summary, there appear to be only two constants in our ever-changing world. One is that Barack Obama is going to be on television every day forever. No venue is too strange. Soon, he’ll be on “Dancing With the Stars” (“And now, doing the Health Care, Energy and Education tango ...”) or delivering the weather report. (“Here we see a wave of systemic change, moving across the nation ...”)

The other immutable truth is that we always need to have somebody we can be really, really angry at. The A.I.G. bonus-takers have pretty much worn out their 15 minutes. In an Op-Ed article in The Times on Wednesday, Jake DeSantis, one of the executive vice presidents of the company’s dreaded financial-products unit, offered up his side of the story about how even though he had never met a credit default swap in his life, he had promised to stay around to help clean up the mess for $1 a year and a bonus at the end of the tunnel. And then, suddenly, there was the head of the company throwing him to the wolves, or at least to the House Financial Services Subcommittee on Capital Markets, Insurance, and Government Sponsored Enterprises.

Too bad these "opinion leaders" weren't so enlightened or willing to lead oh, about 18 months ago.

Posted by Rick at 10:50 AM No comments:
Email ThisBlogThis!Share to TwitterShare to FacebookShare to Pinterest

Bartenders rule. The rest of us drool 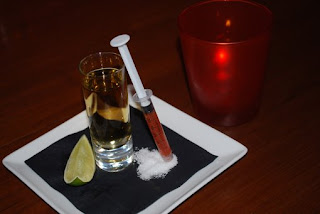 The A-Roid starts with a shot of El Mejor Tequila, served straight up. To give the shot a little something extra; a spicy smoky splash is served on the side in a convenient syringe … minus the needle. Inject the Performance-Enhancing Boost of Spicy Tomato “Juice” right into the shot or use it as a chaser. However you use it, come clean and acknowledge it … don’t deny it.

And as the blogger at soxanddawgs.com points out, "At $11, ARod may be the only one able to afford the cocktail in this economy."
Posted by Rick at 1:33 PM No comments:
Email ThisBlogThis!Share to TwitterShare to FacebookShare to Pinterest

So Ah-nold was lying all along

The Governator was perhaps the best-known proponent of the fallacy (also propagated by Al Gore, Colorado Gov. Bill Ritter, Denver Mayor John Hickenlooper and others) that it's possible for economic vitality and draconian green policies to co-exist. That any trade-offs required to reduce greenhouse gases would be scarcely noticed by Joe Citizen, and that we're all about to reach a carbon-neutral, nirvana of high incomes and minuscule environmental footprints.

Or not. David Owen, in The New Yorker, acknowledges that the only way to significantly reduce greenhouse gases in the near term is by tanking the economy. He also notes that

The environmental benefits of economic decline, though real, are fragile, because they are vulnerable to intervention by governments, which, understandably, want to put people back to work and get them buying non-necessities again—through programs intended to revive ordinary consumer spending (which has a big carbon footprint), and through public-investment projects to build new roads and airports (ditto). Our best intentions regarding conservation and carbon reduction inevitably run up against the realities of foreclosure and bankruptcy and unemployment. How do we persuade people to drive less—an environmental necessity—while also encouraging them to revive our staggering economy by buying new cars?

So keeping GM in business may be patriotic, but it's an act of treason if your true loyalty should be to Gaia instead.
Posted by Rick at 1:00 PM No comments:
Email ThisBlogThis!Share to TwitterShare to FacebookShare to Pinterest

Sen. Ben Cardin, D-Md., introduces a bill that would let newspapers restructure as nonprofits and get many of the tax benefits extended to charitable institutions.

But to what purpose? Rocky Mountain News publisher John Temple asked as much in a column published a month before the paper closed:

[Even] national newspapers ... do far more than inform their citizenry with serious reporting on public affairs. That's just a part of what they do. I can tell you from experience that the comics are far and away the section of newspapers that many readers feel most passionate about. [The] Washington Post publishes comics. Are we going to have nonprofits publishing the funny pages? Members of the public getting tax breaks for donating to keep Garfield alive? If we want to be so high-minded to create nonprofits for public service journalism, we'd have to exclude not only comics but also sports, entertainment, cooking, lifestyles, gossip, horoscopes, puzzles and all the other stuff that readers love but has nothing to do with Jefferson's ideals.

We're a country that values freedom and independence. Invariably, by going the nonprofit route, newspapers would become more beholden to government and more subject to regulation.

Sure enough, Cardin's bill would immediately erode some of the editorial independence that makes newspapers (when they're doing their jobs) an effective public watchdog. If you want a bailout, you have to answer to your paymasters.

Under this arrangement, newspapers would still be free to report on all issues, including political campaigns. But they would be prohibited from making political endorsements.

So what would constitute "political endorsements"? Opinions from editorial boards, signed or unsigned? The musings of staff-written columns, op-eds, letters to the editor?

Would a series of rules like that in the original McCain-Feingold campaign finance law apply -- in other words, would any mention of political candidates by name in an opinion piece 60 days before an election be verboten?

To the degree any of these restrictions are part of the law, they muzzle the press, much as restrictions on political content on broadcast stations (such as the Fairness Doctrine) make a mockery of free speech.

Bailout recipients wouldn't be much more reliable than Pravda, which may be what the Common Cause types want anyway. Might as well toss the First Amendment in the Dumpster.
Posted by Rick at 4:00 PM No comments:
Email ThisBlogThis!Share to TwitterShare to FacebookShare to Pinterest
Newer Posts Older Posts Home
Subscribe to: Posts (Atom)