For awhile, anyway. It's been a fun and interesting year, and more on that later. Now, though, just a note to let anyone who's interested know that blizzards are beautiful and quiet and really suck. It started snowing here at about 5 Wednesday morning. The forecasts were for anywhere from 3 inches to 2 feet in the metro area, depending on where the storm settled.

I took my normal route to work -- drive to a side street near the downtown Littleton light rail station, take the train downtown, walk to work. (More on the Rocky's amazing new digs later.) Snow picked up during the day and the newsroom made arrangements for workers who might be stranded to stay in a hotel. Most of my colleagues and I decided to head home, figuring that we could take the train or a bus this morning.

(You are wrong, mass transit breath!)

The Regional Transit District announced that buses would stop running at 7 p.m. and trains would operate on a limited service -- meaning fewer trips. So we peeled out a bit early. Walking empty streets in downtown Denver during rush hour should be amazing, but it was cold and snowing and I had places to go.

Fortunately, my colleague Steve Oelrich was on the train with me, and his wife Jane picked us up at the station and drove me to my car. The drifts had made digging out the windshield an adventure, but between Jane's snow shovel and both our snow brushes, it only took a couple minutes to clear the glass. And because the snow was dry and fluffy, I was able to power out and head home.

I figured that getting to work would be an adventure, but possible. After all, there's a bus stop adjacent to my apartment complex, and while it takes more time to ride the bus and transfer to the train, it's doable.

Wrong again. Today, no buses. Light rail is closed, until the afternoon, anyway. Passengers can't get to the trains from the bus stops and park-n-rides. So in about an hour, I'm going to see if I can move my car from the parking lot to the main street (Mineral Ave.). If so, I'm golden to get to work. Which is essential, because we still have a few production-related things to do for the Friday and Sunday papers.

Tomorrow is supposed to be better. I haven't measured the snow, but the official reading for Littleton is 21 inches. Drifts can be much higher, of course. In other good news, a storm like this hits Denver only about once every decade.

UPDATE: The train ride last night was surreal, too. Every time it snows, there's always a risk that the doorways to the cars will get clogged with snow or just freeze. The only way to clear them is for the drivers bang on the doors and loosen the slush. Last night, with drifts and wind and temps in the mid-20s, more and more of those doors (there are three sets per car) became paralyzed. At one point, all the passengers were moved from the rear cars to the lead car because the doors were starting to stick. Wouldn't that be fun -- stranded on a rail car! Passengers had to enter and exit from the front door, each of which connects to a ramp that's handicapped accessible, and I believe also can be opened manually if necessary. It was fun, fun, fun.

UPDATE 2: The guys who were clearing snow from our parking lot made a couple of extra scrapes near my bumper, so I was able to get out and go into work. (Good thing; it snowed another foot or more after I got home last night.) The roads were covered with snow but passable. It took about 40 minutes to take the 12-mile drive in. It stopped snowing about noon, giving the gummint time to scrape the roads a few more times. The test will be tomorrow. It's supposed to be about 12 degrees when I get up. If the buses are running (they weren't today), I may just take one to the light rail.

Meantime, here are a few photos: 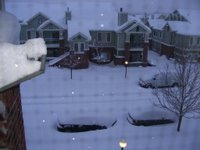 The geese never get too cold; see the flying V in the distance: 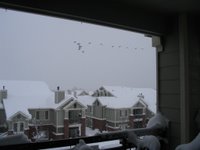 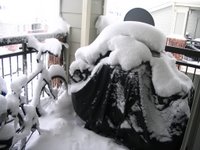 This is the main road to work: 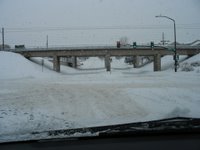 Posted by Rick at 10:16 AM No comments:
Email ThisBlogThis!Share to TwitterShare to FacebookShare to Pinterest
Newer Posts Older Posts Home
Subscribe to: Posts (Atom)